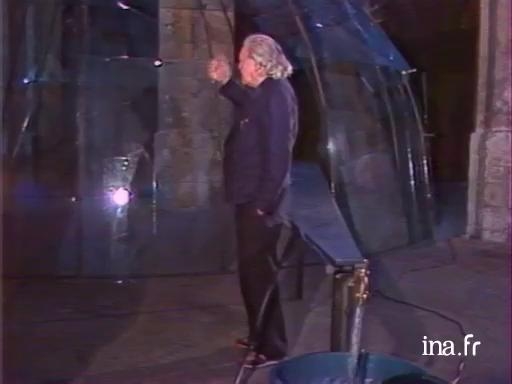 Conversation with Mario Merz, who represents the Arte Povera, on the occasion of an exhibit that is dedicated to him at the CAPC Museum of Contemporary Art in Bordeaux.

An antifascist World War II resistant, who studied medicine before being arrested in 1945, he gained experience with materials in prison, where he constantly drew and sketched on any surface he could find to pass the time. Once freed, he continued to work on his creative skills, in search of shapes that could convey the essence of beings and things (the spiral). Sculptures, drawings, paintings, ...: he was a jack of all trades, using any materials available without value judgement.

Along with Boetti, Fabro and Kounellis, Merz participated in the exhibit that started the whole Arte Povera ("Poor Art") movement, which took place in Genoa in 1967 and which was determined to restore the image of "non-noble" materials. His Igloo de Giap, made in 1968, was built using a metal frame and plastic bags filled with dirt, along with lit neon tubes forming sentences, oftentimes slogans or political quotes revealing the artist's political orientation (the work owes its name to the Vietnamese general who was a popular figure of the people's resistance against the French army during the 1954 battle of Dien Bien Phu). This semi-spheric shape was his favourite and he made several different versions of it using various materials (newspapers, fruits and vegetables...). Mario Merz died of a heart attack on 14 November 2003.

We're already thinking about this summer at the CAPC, the Bordeaux museum of contemporary art which just set up its seasonal exhibit, and it's an Italian painter, Mario Merz, who's occupying all of the space, Mario Merz, who is one of the forefathers of what is referred to as Arte Povera. Take a look.
(Music)

Mario Merz, a 62-year-old Italian, might just be the pope of Arte Povera, this art of staging raw materials. Before he made his first igloo at the beginning of the 70s, he uttered a new language.
(Music)

Me, I really like materials that are a bit strong like iron, obviously but I also like light and fragile materials, especially when you can see inside the materials. So if it's delicate, it also means that it's transparent.
(Music)