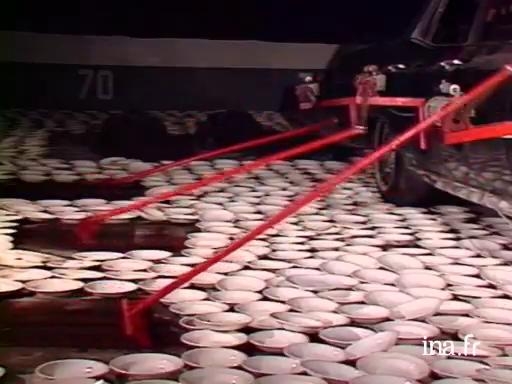 Exhibit dedicated to automobiles, by Berlin artist Wolf Vostell at the Montbéliard Centre of Contemporary Art.

A forerunner of the happening at the beginning of the 1950s, German artist Wolf Vostell (1932-1998), trained at the Academy of Applied Art in Wuppertal, settled in Paris after the war, where he was hired by the studio of Cassandre, a poster maker. He theorised there and applied his "Dé-coll/ages" principle to work, which is a construction game between pictures and words from the media applied to technological works of the communications industry (planes, cars).

Through his creations, which illustrate a dark vision of post-war consumerism (sheet metal, burned carcasses...), Vostell attempted to warn his contemporaries of the destructive effects of human behaviour, usually through events that were shown through the media's lenses: current stories, wars, third world famines, ecological catastrophes...

A member of the Fluxus movement in the 1960s, he inaugurated, along with other artists, video art at the edge of electronics, jolting the "work of art" notion to lead the public to reflect on the role of machines in contemporary societies.

And now, art and automobiles. The celebration continues at the Montbéliard Centre of Cultural Actions, from the beginning of the summer until 8 November. As you know, the centre organises an entire series of events related to automobiles. The featured artist of the moment is sculptor Wolf Vostell, from Berlin, the same Vostell who recently came out with his massive sculptures made from car carcasses and concrete. And as you'll see, his current exhibit at the CAC doesn't leave people indifferent either. Isabelle Brunnarius reports.
(Silence)

Cars in a parking lot. On first thought, it's common, except that they've passed through Vostell's hands. It was thanks to a news story that the artist worked on this Jaguar in 1968. The chocolate? It's a symbol that implies that there's always something good in an event. However, it's better to listen to the guide to understand the work of this Berlin artist. He uses cars, which are his favourite theme, to try to understand his life, with a clear dislike, it seems, for this consumption society. Here, the energy comes from 1,000 pieces of bread tied to 1,000 copies of the Est Républicain newspaper, which represents the exact volume of this Cadillac.
(Silence)

And in each copy, there's one of Vostell's slogans: "It's things that you're unfamiliar with that will change your life", a parade against the close-mindedness which he was accused of. You either know or you don't know this type of art, but it's enlightening either way. The meaning here is: there will come a day when machines will become independent and will reject us.
(noises)

This blowing sound is the noise of the winds in Vostell's imagination. This Mercedes dates back to 1984 and the video, it's to reject us, to exclude us from the intended usage of the car. We rely on it, so much so that we're linked to it with a life-support mechanism.
(noises)

Is Vostell disconcerting? Yes, but his creations always carry meaning, an occasion to be introduced to contemporary art.