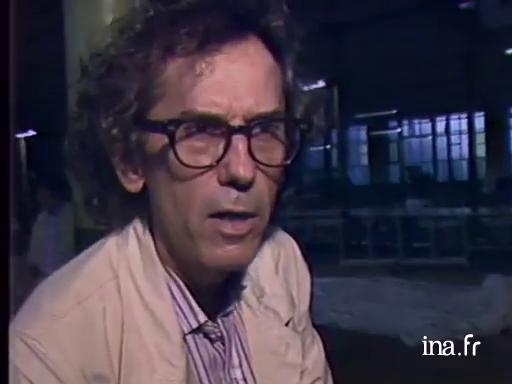 American-Bulgarian artist Christo presents his project: wrapping up the Pont-Neuf with polyamide cloth for fifteen days.

Born in Gabrovo (Bulgarie) in 1935, Christo Javacheff, known as "Christo", was admitted to Sofia's Beaux-Arts school in 1952. Hardly docile with regards to the socialist realism doctrine that governed the artistic production of eastern European countries at that time, Christo fled Vienna and landed in Paris in 1958. He met his future wife and kept company with the group of new realists by creating works from raw materials (cartons, bottles, paper...). In 1962, he tried to erect a wall of oil barrels in Paris to express his anger at the construction of the Berlin wall.

His installation in the United States in 1964 inaugurated large-scale projects. In 1972, he finished his Valley Curtain: a 13000 square metre nylon curtain stretched between two plateaus in a Colorado valley, 350 metres wide. He specialised in "packaging": the Chicago Museum of Contemporary Art (1969), the Scala in Milan (1970).

From 22 September until 7 October 1985, despite controversy and technical and legal difficulties, he covered Paris's oldest bridge, the Pont Neuf, with polyamide cloth. The operation was a genuine success and Christo renewed the attempt by taking over other symbolic locations, like Berlin's Reichstag in 1995. In 2005, he poetically revisited Central Park with The Gates, a path of porticos hung with saffron coloured cloth. Christo's work is directly related to the "short-lived art" movement, which incites the artist to also be a director who films his work to keep a trace of it and to restore it (like here with the Pont-Neuf workers).

In Paris, the famous Pont Neuf won't get cold this autumn. Artist Christo will dress it up. Why this strange initiative? How will he go about it? Sylvie Marion and Jacques Aubertin answer to our curiosity.

A crazy project, a totally unusual work of art that Paris has never seen is about to see the light. This man, an American artist from Bulgaria, Chriso, has set himself the goal of enveloping, draping in cloth, wrapping the Pont Neuf like a huge gift given to Parisians at the end of September for 15 days. This is Christo's project. It won't change Parisians' life at all. This tramp will still be able to sleep, as usual, in the same position under this arch.

That is, that its entire archway will be covered with this cloth of course. The cloth is drawn in a very special way, and it is held up by 11 kilometers of cable and rope, and the cars will also be able to cross the bridge, the tourist boats, pedestrians, walking across the bridge, on the sidewalk covered in cloth, and also the cars on the Georges Pompidou road will pass by freely.

While Christo's monumental project is crazy, its realization, on the other hand, is quite serious. Ten or so companies are working on it. 12 engineers manage a hundred or so employees. 200 people will work on the site. Here, during the entire summer, at the [Valrave] factory in Armentières, we're assembling 40,000 m² of polyamide cloth coloured like Parisian stone.

This will completely envelop it and it will be attached by the frogmen who will leave. But this, this will be opened by the mountaineers and it will fall [inaudible].

We won't fasten anything to the bridge. The bridge will remain entirely in its state and any risks of accidents, large accidents, have been anticipated, I think.

The screening of an American film on one of these works carried out in the Colorado mountains, that's what Christo wanted to show the Armentières workers.

What astounds me the most, in fact, is just thinking about doing it. Because I truly think that it's... In fact, that's the real problem: it's knowing how to think of and imagine something other than what we usually do. But I think for that, you have to be an artist to do that. That's all. That's it, in fact, the original idea. It's to be able to let everyone enjoy it. It's free.

Are you happy with your work on the Pont Neuf?

Of course. It really changes everything. Usually, we work on tents, something very "normal", and on the Pont Neuf, it's really something extraordinary. I can't describe it to you, but truly, the entire factory is participating.

You have to know that Christo finances all of the work entirely by himself, without a penny in grants, by selling drawings and collages that anticipate his work. Collectors take note. If everything goes as planned, at the end of the summer, Parisians will live a poetic moment, collectively, without a doubt unique in the history of the capital.