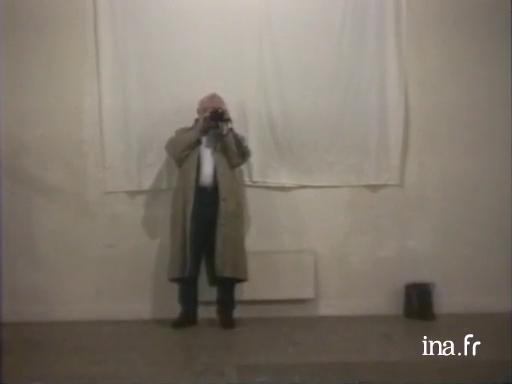 Presentation of the installation of Parking exposed at the Quai de la Gare in Paris, and interview with Matej Kren who comments on the exhibit, the main themes of his work, infinity and doubles, and his sources of inspiration.

A polyvalent artist born in Trencin (Slovakia) in 1958, Matej Kren studied art at the Beaux-Arts Academy in Bratislava from 1977 to 1981, and then in Prague until 1985. The year that he was to receive his degree, he participated in the Kobe art students' international exhibit, where he received the prize of honour.

Matej Kren explored different medias and means of expression: cinema, music, plastic arts, painting, etc... In 1989, he made a cartoon, That's a Movie, which gained attention in several festivals and won a "Danzante de Oro" award in Huesca (Spain) in 1991. He participated in an increasing number of exhibits worldwide (Berlin, Vienna, Chicago, Seoul). In 1992-1993, he was in Paris, a guest of Sevres, a national manufacturer, to collaborate on various projects. His Parking work, presented at the Quai de la Gare, is part of the continuity of his exchanges with the French capital.

Fascinated with literature, he made a "book tower" in Prague in 1998, called Idiom, before building an area entirely made out of books in Lisbon in 2006 (Book Cell).

So, the artist is a 34-year-old Slovak whose name is Matej Kren, who is passing through Paris, he's going back to Bratislava tomorrow, and he's exhibiting a work called "Parking" at the "Quai de la Gare" in Paris, and it's a very amazing arrangement. We are going to see a few images, of two mirrors facing each other, that move and give a sort of dynamic vision of infinity being cast into an abyss. He's an artist that works on virtual images, who works on a system that always questions the personal interpretation that we have of a work. For example, he showed us in Beaubourg, he built a sort of igloo in Beaubourg with books piled up on top of each other, with a mirror set-up that made it look like a spiral of knowledge. The arrangement that we see there, which is in a, which is on display at the "Quai de la Gare" in Paris, are 2 mirrors, as we saw, that move with a removed noise, and with a duration that is quite specific. And of course, depending on where you are, you are overwhelmed by horizontal infinity and by vertical infinity. With the idea that to really seize infinity, you could only obtain it from being in the middle, but it's the blind spot, the impossible spot. So, what I'd like to ask Kren, who unfortunately doesn't speak French, is: does he get the impression that the notion of infinity is a bit like the uniting theme of all of his work?
(Silence)

Infinity isn't the principle theme of my work, but it's still one of the main ones, nevertheless. The theme of a double is also quite present, since your work includes a mirror that opens up on a virtual image.
(Silence)

For me, with regards to the "Parking" work which I'm presenting in Paris, I demonstrated it in 2 different configurations, one where it becomes part of the surroundings, the environment around us, and a second time where it reflects for itself.

Do you share similarities with literary inspirations such as Lewis Caroll or Borgès?
(Silence)

I read a lot, but I wouldn't say that I'm directly inspired by these authors. I can make a relationship that creates itself randomly, but there are certainly similarities that exist between these works.

There, it's a work that we can go see at 91, Quai de la Gare, in Paris, it's called "Parking", and I'm sure that were going to hear about Matej Kren again in the future.

Krysztof Kieslowski regarding the film White