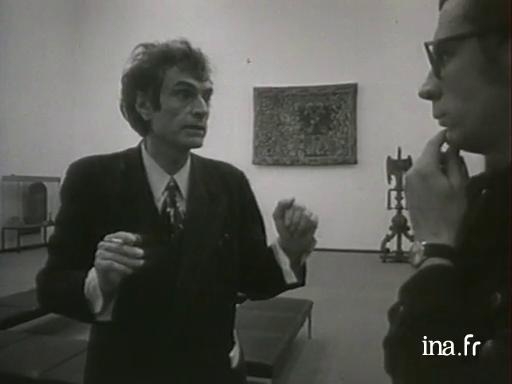 On the occasion of the retrospective that is dedicated to him at Galerie Nationale du Jeu de Paume, portrait of the Belgian surrealist poet, Marcel Broodthaers, whose works we'll discover through films that he shot himself, for the most part, in the 1970s.

After having abandoned chemistry studies and worked in several jobs, this literature lover, an admirer of Mallarme and Magritte, published his first poetry collection at the end of the 1950s. In 1964 he opened his first exhibition of books by ironically warning his visitors on the invitation card, "The idea of inventing something insincere finally crossed my mind."

At 40 years old, Broodthaers casually began his new career as an Plasticien, abandoning poetry which left him in need of, according to him, a feigned art. His first target? His own writings, in which he drowned in a plaster of unsold volumes (Le Pense-bête, 1963). Influenced by Surrealism, he made work with unusual materials (bookshelves, bricks, mussells...) assembled without respect for meaning or value, simply with the idea of overturning the usual categories which gave rationality to things and beings with humour.

An agitator, he said of himself in 1968 "a conserver of the Museum of Modern Art, Eagle Department", a fictitious museum which derided the values of authority and power associated to the animal and used by the powerful. Exploring the maze between the word, the image and thought, he continuously deconstructed texts from his favourite authors (Mallarme, Baudelaire, Lautréamont...) to re-position them in an off-beat space.

1924: born in Brussels. Until he was forty years old, these were Marcel Broodthaers's activities: bookseller, journalist, art critic, photographer, filmmaker and poet especially. 1964: his first exhibit. On the invitation card it said: Myself, I also asked myself whether I could sell something and be successful in life. I've already been a good-for-nothing for quite a while. I'm forty years old. I finally got the idea to invent something insincere. So I immediately set out to create it. After three months, I showed my work to Philippe Edouard Toussaint, the owner of the Saint Laurent Gallery. But it's art, he said. I would be happy to explore all of that. Ok, I answered him. If I sell something, he'll get thirty percent. Those seem to be normal terms. I used the remaining copies of poetry books I wrote as material for a sculpture. He halfway embedded fifty copies of his "Le Pense-Bête" book in plaster. Here, you can't read the book without eliminating the plastic aspect. There you go, books inside plaster. No viewers are curious about the text. Not knowing whether it's prose or poetry, that is happy or sad, that is being buried. No one was moved by this wrong act.
(Silence)

An excerpt from one of Broodthaers's first poems, and a leitmotiv of all of his work.
(Silence)

The rain, the 1969 project for a text, one of fifty short films that Marcel Broodthaers made.
(Silence)

Marcel Broodthaers and his friend, surrealist poet Marcel Lecomte, a painting of his death, in the "Salon Noir".
(Silence)

"Le Corbeau et le Renard", a setting which includes the screening of a film and the presentation of a group of images and texts. The basic text, a poem by Broodthaers, inspired by the fable by de La Fontaine.
(Silence)

1968: inauguration of a fictitious museum in Broodthaers's home in Brussels, the "Musée d'Art Moderne, Départment des Aigles", 19th century section. Cases of artwork packaging, slide projections, postcards, inscriptions, letters by curator Marcel Broodthaers. At that same time, the production of series of thermally moulded plastic plates made using the same parent principle that is featured in waffle-makers. A year later, in 1969, the official closing ceremony of the 19th century section of the "Département des Aigles".

My friends, let me introduce Doctor [Van Baden], the curator of the Middleburg Zeus Museum, who has agreed to give the speech tonight for the closing of the 19th century section of the "Département des Aigles, Musée d'Art Moderne".

Transfer of the Museum through time and space, and loading of the collections at the Anvers inauguration of the 17th century section of the "Département des Aigles".

I say I, wasted the time, wasted, I have. On the level of the sea, of the trip, manifestly, I manifested. I sociologise, no, I preserve, no, I autologue you, yes, I say you, you say you, I say you, the king of the mussels. I say I, I say you.
(Silence)
(Music)

Literary exhibit on Mallarmé. Transformation of the poem into images through black limes which replace the mussels.
(Silence)

One of the ten copies of the twelve anodised aluminium plates.
(Silence)

I think that the result that is achieved is an interrogation on art through the artistic object that is the eagle. That is obvious. Eagle and art are mistaken for one another. Aren't they? And with only one inscription system, the more the general atmosphere lasts, the object's repetition, in addition to the confrontation with the advertising projection, invites viewers to observe an artistic object, in this case an eagle, I'd say you're lo What I mean is, to separate what is art within an object, for example, here, what is art and what is ideological. Right? I want to show the ideology as it is and to, in fact, prevent art from making this ideology unapparent, and therefore efficient. Because I think that within an artistic object, when you uncover its ideology, you also unmask it at the same time. But at the same time, you respect its artistic value, its play on shapes and on colours.

Is this why there were reforms?

From 1974 on, a series of exhibits entitled Decor. The White Room, a model of Pépinière Street, headquarters of the "Musée d'Art Moderne, Département des Aigles", 19th century section.
(Music)

A series of retrospectives, the shooting of many films in London, in Cologne, in Brussels and in Berlin. 1976: Death of Marcel Broodthaers in Cologne.