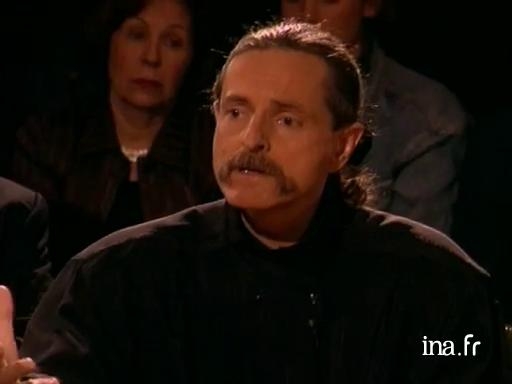 Krzystof Wodiczko, a Polish artist working in the United States, explains his work in cities: he transforms the facades of monuments into art thanks to his projections. After a brief report on Le Bâton d'Etranger, a mechanism created by the artist which is a sort of traditional shepherd's crook equipped with a monitor, Wodiczko also talks about his conception of art and his role in society.

Since the 1980s, Krzysztof Wodiczko, a Polish video director born in Poland in 1943, has actively created short-lived urban art and installed massive projections on the facades of buildings in order to reveal the poverty of those living at the base of these facades. Immigrants and homeless people therefore find themselves juxtaposed against a decor of buildings symbolising economic and political power.

With a degree obtained from Warsaw's Beaux-Arts school in 1968, Wodiczko started out by teaching industrial design and visual arts all over the world (at the California Arts Institute, at the New-York Institute of Technology, etc...). His "nomad design" theories, like his "shepherd sticks", must record speech and preserve immigrants' memories. He is interested in the relationship between ethics and technology, while observing the societies' political developments, which he explores through visual creations and video installations.

His committed works, exhibited in various Biennial art events, sometimes elicit confusion and controversy, but they always make people reflect on the state of the world and its inequalities. In 1998, Wodiczko received the Hiroshima Prize which honours artists for their contributions to world peace.

So I am receiving tonight an artist of Polish origins, but who works in the United States whose name is Krzysztof Wodiczko, and... Well, he has a specific kind of work on the city that is completely individual because he uses the city as a sort of image production site. Well, either he projects images onto the city, on buildings, or he makes the images of these buildings surge forth, and I know that there is a reference that he holds dear, that of Brecht and the notion of an epic architectural theatre, which is found in
(Silence)

Brecht had proposed that instead of looking to identify with characters, the public must be given by the conditions in which the characters function. So for the homeless in New York, some 100,000, you could even say that they are the new city monuments. Unintentional city monuments. These frozen gestures, representing the large gestures in the face of heroic progress, and in the idealism of historic monuments. And these monuments are themselves stunned to realize that the steps beneath them, the new monuments of the city, are living, and so the contradiction between the idealism of these monuments and the present is already visible, and constitutes already a pr

And so you work on, and so you will see images, on what you call the alien staffs, that is a sort of modernized version of the old shepherd's staff that you use as a sort of possible social beacon for this homeless population, without shelter, and we will

Does the trace mean something to you? Yes, that represents my roots, it is a symbol, a metaphor. Completely shattered, and at the same time, entirely infused. I tell pieces, broken elements from my own history in relation to the changing of countries. Exactly, exactly.

And what is that?

And that, that is part of my past, because I have a masters in computer science, and I am a computer scientist, and that is a circuit. It is a part, because when I lived in Italy, I had just finished my computer science studies when I came on a trip to Paris, and in Paris I fell in love with a Parisian artist, and I stayed, but...

So, this shepherd's staff, we can se, there is a mobile video, there is a loud-speaker, that is, what is it? It is a way of laying claim to a sort of social cohesion that is denied to part of today's population living in the city?

When we speak of the city, we must also speak of public space, which is therefore directly linked to the very concept of democracy. And visibility is a condition that is a prerequisite for democracy. And the voices of those who are silent also constitute a precondition for the city, that allows different aspects of society to intervene, the speakers that represent people and enable a communication with the environment, and the possibility of creating For me, art or creation can also propose not exactly a solution to problems, not only to make contradictions apparent as is the case with the projections, but to offer a slanted artifice by which those who are strangers can become open and exposed in the face of the complexity of identification of the process of reconfiguration. to expose oneself to others and to provoke and invite those who are not strange But who in fact hide, they hide in the subconscious the fear of their own quality of a stranger and of projecting it towards the so-called veritable dangers. So art can become a point that absorbs a multiplicity of different queries and discourses, and explodes with the whole of these elements by creating a much more complex discourse.