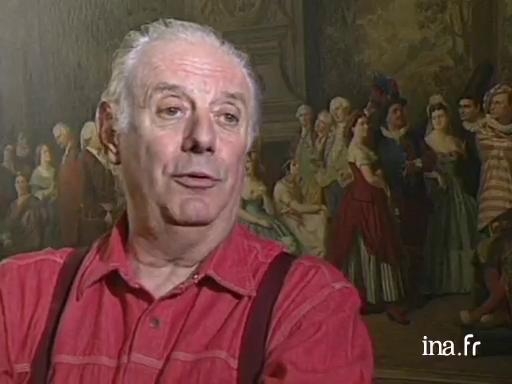 Dario Fo stages Molière's The Flying Doctor at the Comédie Française, in the tradition of the Commedia dell arte.

Italian playwright, actor, director and scenographer, Dario Fo was born in 1926 in Lombardy. His theatre expresses a radical political and civic engagement through the method of laughter as a struggle against oppression and the ruling classes. From an anti-fascist working-class family, Fo studied art and architecture. He began on stage in 1952. That year he wrote comic monologues for the radio. In 1954 he married the actress Franca Rame who became his privileged partner. Together they founded their company and performed traditional farces and musicals. In 1962 the sketches that were shown on television were, despite their great success, caught out by censorship. Fo wrote seven comedies between 1959 and 1968. His fame came in 1969 withMistero Bouffo. Neglecting the official theatre stages, the couple created the La Comune collective and invented a theatre with minimalist decor that could be adapted to any kind of place. Shows were put on in striking factories and at political meetings. It was the era ofAccidental death of an anarchist(1970) andWe won't pay!(1974). Dario Fo wrote monologues for Franca Rame about the struggles women face. His anticonformism earned him numerous quarrels with the law in Italy and the Vatican.

He was frequently asked to direct foreign productions, notably lyrical ones. Dario Fo wrote around 70 works. He received the Nobel Prize for Literature in 1997.

Acrobats on stage, it's Molière down to a T. Here, the doctor is truly flying. Since we're in a farce, Dario Fo fills Molière with gags, music and circus acts. By what right? By the right of the author who left blanks in his texts, etceteras that give you total freedom for anything burlesque.
(noises)

That's how we played comedy in Italy when Molière was alive. And that's probably how we see Molière as.

Me, I was really incredibly lucky to find texts from the same period as Molière but written by Italians, and there, he had the supreme intelligence to understand the key to renewal that there was, of liveliness, of fantasy that there was in Italian comedies.
(noises)

The actors of the Français followed Dario Fo through exhausting rehearsals that ended like a theatre celebration.
(Music)

As for the Comédie Française's audience, they find in Dario Fo a contemporary Italian Molière.
(noises)