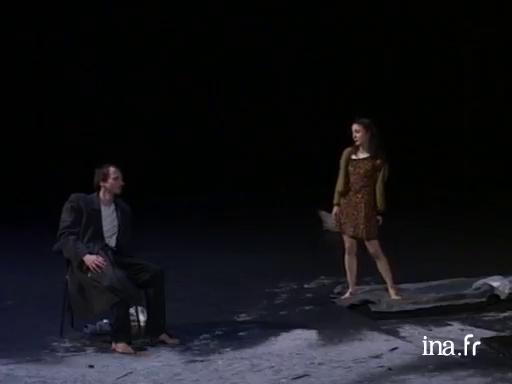 Actress Agathe Molière speaks with Philippe Lefait regarding the play War, written by Swedish playwright Lars Noren, and staged at the Théâtre des Amandiers in Nanterre. This play focuses on a war whose name we don't know, and on how it transform humans, those that go to fight and those that don't, the adults and the children.

Swedish playwright and director Lars Norén (born in 1944) starting writing poetry collections (Lilac, snow). After a short spell as a novelist he started writing for the theatre from 1973 and directed his work. Considered as August Strindberg's heir, he explored existential anguish through the in camera family situation, by delving into his own intimacy (The courage to killin 1978,TheLast Supperin 1985). WithThe Human Circle 3:1(1997), he left the familial arena to follow an interest in outsiders. In France, Norén's work has been performed by many directors, notably by Jean-Louis Martinelli at the Théâtre des Amandiers in Nantenne (works such asKlinikenin 2007 andDetailsin 2008)

Lars Norén succeeded Ingmar Bergman for a while at the head of the Swedish National Theatre and since 1999 he has managed the Riksdrama, the travelling national theatre.

We are now going to speak of the theatre with you, Agathe Molière, you who are so wonderfully named, which I am sure you hear all the time, evidently, right, moving on... You are an actress and are playing in the Swedish play by Lars Noren, you play a young girl who is reunited with her father after he returns from war. So we imagine that we are in ex-Yugoslavia, it resembles ex-Yugoslavia, and it is a completely pessimistic play, but which gives in the end, a terrible desire to live. And it is impossible, impossible to leave this performance without thinking about it for days and days and days. How did you approach this character, and is it possible in the end to incarnate horror, personify horror?

That I think is different when on the inside, because like the characters, we live in their conditions and in their life, it is harder for the spectator than it is, I think, for us who are inside.

There. And it speaks of survival in fact. A little bit then...

Yes, but survival on what condition? Everyone is handicapped in this play. That is to say that you, you have a paralyzed arm, your sister is a prostitute, the mother has remade her own life, with the brother-in-law, and the man who returns from war returns blinded. So there is no escape, we are surrounded by horror.

How, you spoke of the inside a moment ago, how did you approach this character? We will see in a second, and if we do not know your age, let us imagine that you are 15 years old. How can you succeed in this performance, because it is a veritable... Well, for the moment, let us put the play and its horror aside, but, an extraordinary performance, by an actor.
(Silence)

In fact, for me, it is a question of energy, it is for me, to interpret like this a child, I had to seek a different energy than that that I have, and afterwards I, Lars Noren directed us in a way not to act and to be. That is, we didn't have to play anything, but, he always told us not to play the child but to be a child, that I was a child. That I could be confident that I was a child, and as soon as I began to play the child, it was no longer believable, so it is a state of energy, of awakening, and of the curiosity of childhood and reaction. It is just reaction and not...

No playing, no construction, no...

Yet you find this childhood in you? Is it the memory, is it...

It is there, it is there in us.

Let us watch an excerpt from the play, so you, you play Semira, you are 12 years old. you speak to you father of what you have read, and the book is, I have forgotten the title.

It is Anne Frank

Yes, the Diary of Anne Frank, right? So, we are watching this moment where the blind father is having a discussion with his daughter who has grown.

Who told you that?

Mother, she said that maybe we would move, we will be able to pay for food, for clothes, for me to go to school.

We will not move anywhere.

No, I do not want to move. It is alright that you cannot see. Of course, it is difficult for you, but it would have been worse if you had not been able to walk. There is a boy in my class, he no longer has arms. And there is another who only has one leg. But he still plays football! He wants to be a football star! Pah! All they do is play football. [unclear] she doesn't go to school, so it's alright. Mother said that I could go to the hospital, because I was so frightened. Then I was shaking non-stop, I couldn't et or sleep. But now I am no longer afraid! Now we are going to kill them all, and afterwards, they will no longer be able to do anything, and then everything will be alright again, I will be able to go to school, and when I come home, I will be able to read the newsp Belina, she wants to move, but I don't know where she wants to move to. She is trying to save money, to make it possible. But I, I intend to stay and take care of you and of Mother. Maybe she will come and visit us after a certain time, and she will bring

You are the child. How did you read the play in the beginning? There, without thinking that you were or weren't going to play her, you were going to be the child? But how does one receive this play?

In fact, when we read it for the first time, he had not written the end, so... It is a creation, therefore we have, we discovered it as we went through it. The first time we read it, we only had the first three-fourths, and so we could not, we were, it was part of the play that we worked with but we could not envisage anything of the whole We moved forward at the same time as the writing progressed, and as the project progressed, so we were all at the same position, we could not, it is not psychological, we could not think beforehand.

So at the end of the play, we are going to divulge it here, but at the end of the play then, finally the brother, the man who returns from war, who comes home blind from the war, finally realizes that his brother whom he had been told, whom his wife had t They find themselves face to face, and they have not lived the war in the same way. One was essentially stuck, and the other went to war, and the play ends with the brother who speaks of his son, and of his son's donkeys, and who says: well, what did you And they ordered me to hit him, to hit him, to hit him....and that is how the play ends. And I find that it is an incredible play, that speaks 10 times better than any journalist or any television report on the war, or any written articles, that speaks of war and of the feelings that can be experienced. But there are also things that were remarkable done by the theatre in this domain, such as "Requiem pour Srebrenica" by Olivier Py or by the Orff group, which is a company, a Belgian company, "Rwanda 94". I find that we are in the same theatrical register that speaks prodigiously and profoundly. Thank you Agathe Molière for having been with us, you just came off the stage then, so you had, you had to run a little to be with us, it is very kind of you.