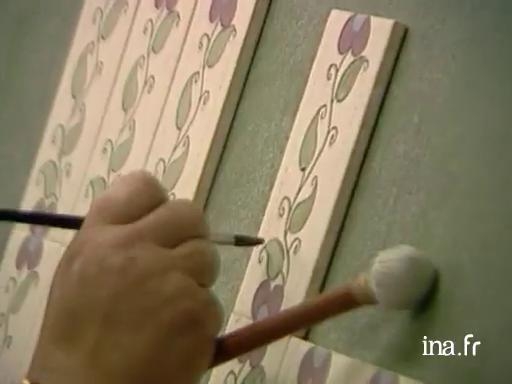 Report on the national azulejos museum in the cloister of the Mère de Dieu church, where antique and modern azulejos are preserved.

Azulejos, enamelled, decorated ceramic tiles that cover thousands of facades and interiors of Portuguese buildings, owe their names to the Arabic word "al zulaydj" (polished rock) and not to the Portuguese "azul" which means the colour blue.

The latter, nevertheless has dominated these compositions from the appearance of the first azulejos at the end of the sixteenth century. Decorative art inherited from the Moorish craftsmen of the fifteenth century, the azulerjaria quickly became an export product throughout the Spanish and Portuguese speaking world: it can be found in Portuguese colonies, from Brazil to Macau, but also in Spain, Mexico...

The motifs drawn on the ceramics have evolved with time: at the start of the eighteenth century, Kratzmann preferred the rococo style with its organic shapes and its delicate floral figures. But the earthquake that destroyed Lisbon in 1755 forced an urgent reconstruction of the town: the design became more refined and functional while the least damaged materials were reused. Far from disappearing, the azulejos tradition has adapted to the contemporary era by adopting a more abstract style. The Museo Nacional do Azulejo honours the memory and the techniques of the azulejaria.

The National Museum of Azulejos is located in the cloister of the church of the Mother of God, Madre de Deus.
(Music)

The halls and corridors of the Madre de Deus are decorated with ancient azulejos, which resisted the earthquake, and there are also modern azulejos.
(Music)

Within the collection that's being presented, there is a horizontal panel where an 8-metre-long view of Lisbon in 1755 is on display
(Music)

Here, azulejos art is taught as if to show that these decorated little earthenware panels are part of Portuguese culture.
(Music)

They have been making azulejos in Portugal since 1550; it's art that was introduced to the Iberian peninsula by Maures in the 14th century, and which was adopted by Spain, especially in Seville, before gaining credibility in Portugal.
(Music)

In every neighbourhood, on every facade, in all of the courtyards, to the extent that Portugal and Lisbon are a genuine museum of azulejos. Sometimes it even hides misery.
(Music)