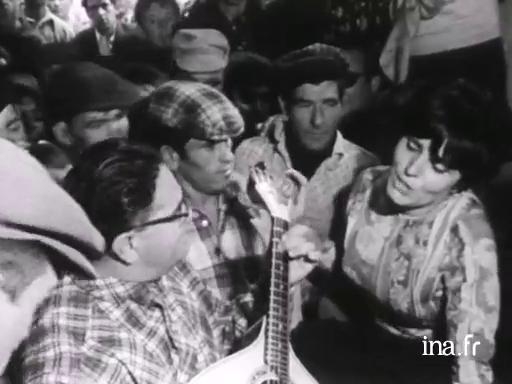 Interview with fado singer Amalia Rodriguez. She sings in her home, accompanied by several guitarists, and in a cabaret.

Beyond being the greatest singer in the history of the fado, Amalia Rodriguez (1920-1999) is a genuine myth in popular Lusitanian culture. Born in a very modest family with nine children, Amalia is only 19 when she starts performing in the most popular fado house of Lisbon, "Retiro da Severa". Her personal and distressing way of singing these nostalgic and sensual traditional melodies became a sensation. Frederico Valério discovered her and decided to write songs for her that were customised and broke free with the genre's traditional canon orchestration.

Amalia quickly imposed herself as the "queen of fado", but it was in 1954, when she participated in Henri Verneuil's film Les Amants du Tage that her fame became international. She recorded her first records, sang on the biggest stages, and appeared to be the voice of Portugal in the world's eyes. At the beginning of the 1960s, she met French composer Alain Oulman, who accompanied her during the rest of the decade. In 1970, she recorded the album Com que Voz, considered by many people to be her masterpiece.

During the 1974 Carnation Revolution, when she was suspected of being a sympathiser of the Salazar regime, she had some less successful times. But her 1977 comeback album, Cantigas numa Lingua Antiga, was a triumph. A true living legend, Amalia Rodriguez died in 1999 at the age of 79. She was the first woman to have entered Lisbon's national Pantheon.

Tonight, Amalia Rodrigues will sing in a great Parisian music hall. In Lisbon, her native city, she is the idol of the Portuguese, the incarnation of the fado.
(Music)

I was 7 years old, 6 years old, I already sang like the other children. I sang at home and in the streets, at school, all that. I was always singing. But, just like that, I started singing in public, at the age of 17.

And were you poor at that time?

Well, I didn't have anything. I had nothing at all. So people, they always told me: "Why don't you go sing?", because I sung the fado very well. "You have to go, you have to sing because that way, you'll be a great artist". Myself, I didn't believe it. But one day, a friend of mine, he took me to a place that was typical for fado. I sang for the owner. He hired me right away.

What is the fado?

And is the fado a feeling that only expresses love?

No. Me, I never said that the fado, is love. It's a feeling. It's something that... You know, society, the people who are poor... how can I say it? It's also kind of like a lament. Everyone that's suffering, and they feel like crying. It's our way of lamenting in Portugal.
(Music)