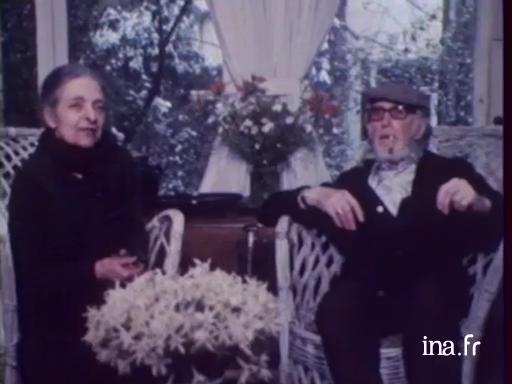 Conversation with artist-painters Maria Elena Vieira da Silva and her husband Arpad Szenes in their home. They discuss colours, television, and painting.

Born in Lisbon in 1908, Maria Elena Vieira da Silva never ceased to make the link between this city and her azulejos that haunt a number of paintings, and Paris, that she went to in 1928 to live there until her death in 1992. She would however leave Europe during the Second World War and would stay in Brazil until 1947.

The paintings of Vieira da Silva let one guess about his personality: secretive, melancholic, cerebral. She began drawing lessons at 11 years old and would never stop learning, researching and training several disciplines: painting, sculpture, anatomy, engraving, tapestry. On her arrival in Paris she would have a prestigious education: Dufresne and de Friesz in 1928, the academy of Fernand Léger and lessons from Bissière in 1929. In 1930 she married the Hungarian painter Arpad Szenes, that she would only part from on his death in 1985. An admirer of Torres Garcia, Vieira da Silva is generally classed amongst the abstract painters of the Paris second School, which also notably includes Pierre Soulages and Nicolas de Staël.

Nevertheless the influence of cubism is highly visible in the artist's work, in her manner of renewing figurative processes, with vanishing lines, chromatic play and complex mosaics that evoke an urban landscape in disarray. Marked by music and poetry, her painting would illustrate the works of Pierre Boulez and René Char.

later on today, this 6th of January marks an anniversary. Each year, on the 6th of January, we celebrate the debut of TF1's news show and we always do it by placing our programs under the aegis of a great contemporary artist. Calder, Miró, and Bram Van Velde have illustrated our news shows on the 6th of January 1976, '77 and '78, respectively. And this year, to commemorate the fourth anniversary of your news show's debut, our editor in chief, Christian Bernadac, has chosen the great artist Vieira Da Silva. Her paintings will illustrate our 8.00 pm edition tonight, but we'll join her again right afterwards, along with her husband, painter Arpad Szenes. Moreover, he too has also received the National Grand Prize of art. Between them, they have 53 years of living together, of researching art and dialogue, like that which Nicole Brisse has gathered.

Vieira Da Silva, Arpad Szenes, two names that cannot be separated from abstract art, two giants of contemporary art that welcomed us yesterday, with extraordinary simplicity. We spoke about art, obviously, but also about television (it was inevitable), about colour tv.

I love coulour, I love it very much.

Because we can arrange colours.

Especially if I can fake them completely. When you are both together, do you talk about painting? Or do you each preserve your secret garden?

You know, it's very hard to speak about painting with just words.

Sometimes it's a gesture.

It's very personal, they are signals.

Talking with signals, that's very beautiful between two artists. Do you understand each other? Are these signals always understood between each other?

But even with other painters, there's things that we say halfway and that we understand like you, a photographer and another photographer can understand each other without having to spell things out.

Arpad, are you able to speak about your wife's paintings?

I don't know if I can. I know how to love my wife's paintings, but speaking, [inaudible] speaking too much. [inaudible] I speak like a painter in the superlative, who is always in love. It's only 50 years of love.

There is in you, a regular and serene force.

It must be very subconscious because I don't realize it when I have a doubt.

Do you still experience doubt, in front of a canvas?

Doubt, one of the greatest motivating forces for an artist eternally on the watch.
(Silence)