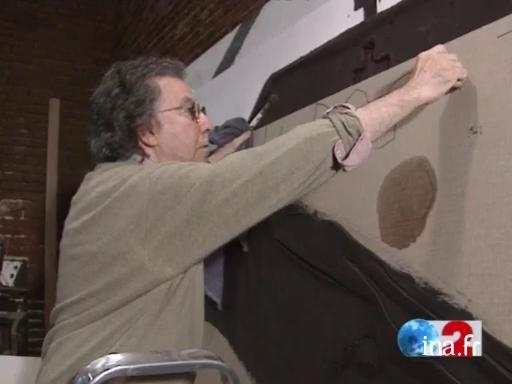 Portrait and conversation with Antoni Tapies on the occasion of a retrospective that is dedicated to him at the Galerie Nationale du Jeu de Paume. Tapies talks about his work method, the symbol of the cross, which is very present in his work, and the duality of his work between painting and sculpture.

A herald of Arte Povera, Antoni Tapies introduced non-academic materials to his paintings that often seemed like sculptures with their such marked reliefs. In the 1950s, dust, clay and marble powder were used in his painting, before adding to them, two decades later, real objects, shoes, clothes, even pieces of furniture.

This Catalan, born in Barcelona in 1923, bathed in a universe of books and his passion for philosophy, theology and oriental art. A victim of a serious pulmonary illness at 18 years old, the doctor looking after him was one of Picasso's childhood friends. Introduced by him, he met the master in Paris, in his workshop. In 1949, he'd meet another great name of Spanish painting, Joan Miro, who had a large influence on him as did Paul Klee. Tapies shared with the latter a neutral artist approach, at a time when most of them were engaged in the Communist Party.

Tapies brought not least a critical view of his time, his painting underlining vacuity and brutality. The crosses dotted throughout his work are such references to the cemeteries filled with the dead from the Spanish Civil War and the Second World War.

The Galerie Nationale du Jeu de Paume, in Paris, pays a well deserved tribute to the most famous contemporary Spanish painters, Tapiès, an artist who knows how to work with his material. Exclusively on France 2, Tapiès welcomed Georges Begou and Jean-Louis Bousser in his studio.
(Music)

You're entering the world of Tapiès as the beautiful white surroundings of the Jeu de Paume show us in a collection of 70 of his works. These works are proof of the Catalonian painter's great innovation since the 1950s. Tapiès imagined a new relationship between the painter and the materials that weren't considered pictorial.

I wanted the canvas to be sort of like a talisman, so that when you touch it, you feel healing energy for example. Ideally, you would take a small painting, when you have a headache, and by touching it with your head, it would give you energy that heals you. Let's just say that each material expresses itself in its own way. You have to let them speak. They already have an expressive charge.
(Music)

I work like a poet, in fact, what I mean is that I express myself through my general sensitivity without overanalysing things.

Amongst all the symbols, the one that we most often find in your work is the cross.

It started at the beginning of the 1940s, when I was starting out, and what did I see around me? It was right after the Civil War and at the beginning of World War II, at that time, all we saw were cemetaries, crosses were always very present here. I introduced the cross in my signature. It's the T in Tapiès.
(Music)

Tapiès, a painter or a sculptor?

For me, there never was a big difference. I know that there are some critics who said: "Tapiès has crossed over to sculpture", but I don't really think that's true. We converted the paintings into an object, a sort of magic object.

A magic that always comes back to life in the red brick hangar studio where Tapiès, 71 years old, pursues his work, whose influence on today's art is undeniable.