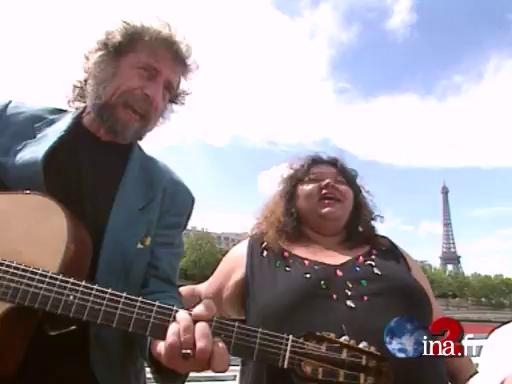 Report on Vera Bila and the band Kale on the occasion of a concert at the Bouffes du Nord theatre. Excerpts of the show, interviews of Vera Bila and her musicians at the dawn of their international career, and conversation with singer Dan Garibian of the band Bratsch.

Born the 22nd of May 1954 in Rokycany, the small bohemian gypsy village in the Czech Republic, Vera Bila was from a family of musicians and from her childhood sang in the village festivals, marriages and baptisms, accompanied by her father, violinist and leader of a traditional Romany group.

But it was only in the middle of the 1990s that she was invited by the singer Zuzana Navarova to perform regularly with the Czech folk group Nerez, Vera Bila achieved fame in her own country and recorded her first record in 1995, Rom pop. This collection of songs in the form of a fascinating odyssey of the history of Romany music since its origins, revealed to the whole of Europe a unique voice that was powerful and filled with emotion. A second album Kale Kalor recorded in 1998 with her own group Kale (traditional Gypsy Orchestra with fiddles, guitars, violins, accordions and cimbaloms) as well as a documentary film Cernobila u barve made in 1999 about life in Rokycany, finally brought her renown in North America (Canada, USA). In 2005 she gave her third record a French title, C'est comme ça, which summed up her life philosophy.

It's a dream come true for a group of tsiganes that were still unknown a year ago and that, today, are starting a world tour. Vera Bila, the singer, and her guitarists are at the Bouffes du Nord theatre until Saturday night. Report: Caroline Laudrin, Jacques Gregor.
(Music)

Not long ago, Vera and her cousins were singing amongst themselves, in their small village in the heart of Bohemia.
(Music)

They are nothing like fashionable singers. They don't even know about show-biz.
(Music)

Over a rather exotic music, they, like all Tsiganes, talk about the minor and major misfortunes of life.
(Music)

In the beginning, we sang traditional tsigane. Today, our music has nothing to do with it. Subconsciously, we've absorbed everything that we've been hearing and that has resulted in a mix. If it sounds like Brazilian music, then that's a coincidence.
(Music)

With them, Dan Garibian, the tsigane singer of the band Bratsch. Everywhere they go, music follows them.
(Music)

Today in Paris, tomorrow in Montreal, the life of an artist and a tourist makes lets them discover new scenery.
(Music)

It's the beginning of success, even if they don't yet believe it.

We don't know if it will work. And since we're scared to stop, we still go to the factory.
(Music)

They were simple nomads. They've become music stars. In their country, they weren't allowed to enter coffeshops. Today, the tables have turned, and people fight over them.
(Music)