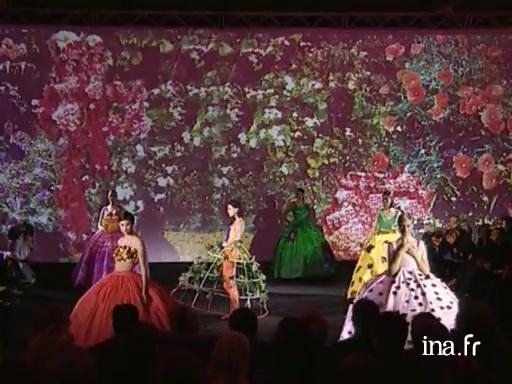 Portrait of Spanish fashion designer Agatha Ruiz de la Prada. Interview with the designer and with Christian Tortu, a floral art creator, regarding their collaboration in his latest collection.

Agatha Ruiz de la Prada is to Spanish fashion what Almodovar is to its cinema: a flag-bearer for Movida. This moral liberation movement marked the return of democracy after the Francoist dictatorship at the beginning of the 1980s. Under the influence of the English New Wave, it was a real cultural revolution which affected the very catholic and conservative Spain. Carried on the vitality and exuberance of the young artists, the Iberian peninsula was reborn with a festive nocturnal life which has since been a symbol of its identity. It's this state of mind which characterises the works of Agatha Ruiz de la Prada.

Born in Madrid in 1960 into a family of art collectors, the creator was tempted by painting but in the end chose fashion and design. She attended courses at the School of Art and Fashion Technique in Barcelona and in 1981 presented her first collection, whimsical, childish and colourful. Since then, thanks to multiple collaborations, with different sponsors she continued to produce her famous colourful hearts, moons, stars and suns, influenced by Pop Art and Mark Rothko painting.

The colour, she brought it to us from her native Spain, and settled in Paris. A conversation with the eccentric Agatha, who creates flower dresses to get attention.
(Music)

Colour is the common bond between all of my creations. I think that if you put colour in your life, you become happier, saner, more joyful. There are fewer problems, you are in better health. For me, black is a bit like the colour of death, it scares me a lot, and it's also a bit like the colour of lack of freedom, of totalitarianism. I created a collection in collaboration with Christian Tortu. All of the dresses were made the day before or the day of the fashion show. They were all made with plants or with flowers.
(Music)

And right away, by seeing the samples, just the sketches of the designs, I was right away able to, she gave me complete freedom and I was able to imagine which flower goes with which model.
(Music)

The day before the fashion show, there was an incredible work atmosphere, because working with flowers, it's like a party.

I liked this idea that everything was open and that we could do whatever we felt like. Thanks to Agatha, we were transported to a world of dreams. Because there's a fantastic part of her that is truly about dreams.
(Music)

I've wanted to make dresses with flowers like this for a long time, because I love that which is ephemeral.
(Music)

It's great to have problems, because it gives you the possibility to find solutions, right? It's kind of what I wanted to be in my profession, to be someone that experiments, you know?
(Music)

I think that Paris is the fashion capital of the world, I do fashion shows a bit everywhere, I do shows in the United States, in Japan, in Germany, in Italy. I get the impression that Paris is the most difficult place, but if you succeed there, you are a success.