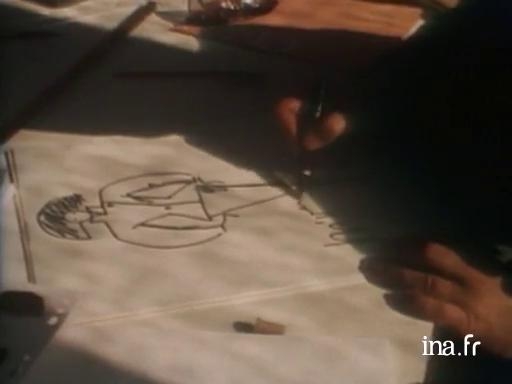 Portrait of clothing designer Karl Lagerfeld, the most Parisian of Germans, who has been living in Paris since the age of 14 and currently works in a renowned ready-to-wear company.

Dates are uncertain when talking about the German stylists life, but the portrait is immutable: black suit and tied back hair, Karl Lagerfeld is haute-couture frivolous elegance incarnate and has been for nearly fifty years.

Born in Hamburg in 1938 according to his official CV, some say he's getting younger. Raised as an aristocrat by a Swedish father who made his fortune by importing Gloria condensed milk into Germany, and a violinist mother, the young man wasn't too interested in school. He spoke no less than three languages when he arrived in Paris between 14 and 17 years old according to different interviews given. He would meet a quick success by winning, in 1954, the competition organised by the International Wool Secretariat, with a sketch of a coat, while in the dress category, the seventeen year old winner was called Yves Saint Laurent.

Followed by a prestigious career working for the large houses: Balmain, Patou, Valentino, Fendi, Chloé and from 1983, Chanel, where he made his mark. Dusting off the emblematic tweed-clad tailor, the incarnation of "French chic", this guru would also invent the "Chanel Icons" from Inès de la Fressange to Claudia Schiffer. Fond of graphic cuts, black and white contrasts, hard lines broken by a touch of femininity, Karl Lagerfeld imposed his style on rue Cambon. Cultivated and caustic, he says he draws inspiration from Mademoiselle Julie, heroin of August Strindberg and portraits of Romaine Brooks, the androgynous and bisexual American painter who dressed in black, grey and white.

We were in Hamburg yesterday, as you know, and I think that there was a name missing from our special Franco-German party, another celebrity from Hamburg, Karl Lagerfeld. I promised you he would be there. In fact, the most Parisian of Germans has been living in Paris since the age of 14. He is a clothing designer in a renowned ready-to-wear company. So, French? German? Today, he doesn't worry about that at all. The drawing of a line or the clash between colours is more important to him than the outline of a border.
(Silence)

And when Karl Lagerfeld draws a map of Europe, it always looks like a woman.
(Silence)
(Music)

I consider myself to be more of a stylist. In my opinion, the term "fashion designer" is a bit out of date. And European stylist, stylist of today, I don't ask myself that when I wake up, am I German? Am I French? And these types of things. I don't ask myself these questions. I would say that, today, we have a European sensitivity. Things were perhaps different, 20 years ago. There was a much greater sense of difference between countries.
(Music)

When I came to France, I was 14 years old. I wanted to go to school in France. I always dreamed about it. Because right from the start, I had learned English, French, German, so there wasn't any language barrier. I really had the impression of travelling abroad, back then. Now, however, France, Germany, Italy, especially in fashion, I can't say that these countries are the same. But the atmosphere is still the same.
(Music)