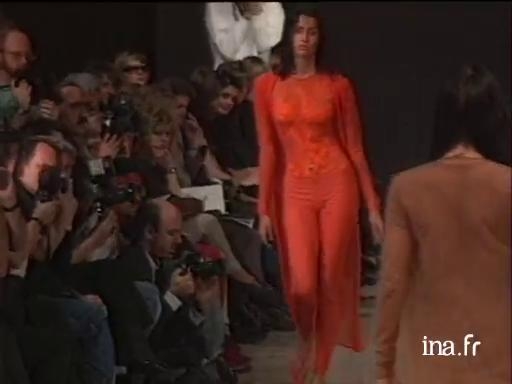 Austrian fashion creator, born in Vienna in 1956, Helmut Lang presented his first collection of prêt-à-porter in 1984.

As a counter-current to 1980s fashion, with shoulder pads and blatant prints, the Lang style was urban, minimalist and androgynous. He announced the clothing preferences for the following decade, preferences that he shared with Jill Sander, Calvin Klein and Prada. He innovated by introducing unisex into his collections, which he always wanted without make-up to remind of the masculine-feminine character of his creations, which still managed to include a degree of sensuality. Helmut Lang also launched the fashion for deluxe jeans that had been very worked. In the 1990s his clothes became the uniform of hip New-Yorkers into cinema, art and marketing.

In 1999, at the height of all the mergers and acquisitions, Helmut Lang sold his brand to the Prada group but the addition didn't hold. In 2004 the split was consummated with the departure of the designer from his own company, which Prada would sell two years later.

The beginning of the 1991 spring/summer ready-to-wear fashion shows. Marie José Lepicard and Bernard Connord have unearthed a rare bird: a minimalist star without ostrich feathers nor glitter. His name is Lang. Rest assured, his first name is Helmut and he's Austrian. This clothing designer came to Paris as a total unknown 4 years ago.
(Music)

A minimalist fashion for the summer of 1991. Very simple clothing for proud wearers of expensive rags. This is it, the latest infatuation of the opinion leaders, in terms of fashion. But since not everything can be expensive, Helmut Lang, the young creator, will also sell, in 1991, paper robes. Solid or printed, at affordable prices. The explanatory leaflet says that they can be worn several times.
(Music)

Meanwhile, the success is there. In Paris, Helmut Lang has climbed to the top in terms of popularity as reported by the hit parade of clothing designers which is organised each season by the highly professional Journal du Textile.

It happens after much excesses, many complicated things. Well, there was the Japanese period which, I think, is now completely over. There was the dressmaking period with the little spruce Parisian. And now, I think that it's the period of, I don't know, a rather adolescent fashion, an easy fashion, a fashion that doesn't seem too expensive. Therefore, every 6 months, a rank of the designers is established. However, this time, for the first time, and it's truly an event, Helmut Lang has come in at second place. It's truly a stunning progression.

[German] Paris is truly the only important European setting for fashion. And even if this wasn't the case, it's important for me. We also display the collection in Tokyo, once a year, but for reasons that are far more sales-oriented. Here, it's for feelings, emotions, the message.
(Music)

It's the success of youth and of a fashion system designed by those under 30 years of age.
(Music)