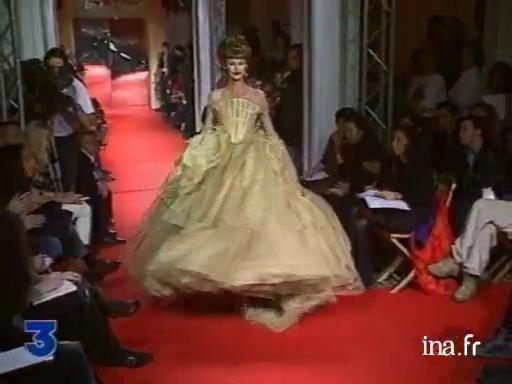 Presentation of Vivienne Westwood's collection, in the context of the ready-to-wear fashion shows in Paris. Godmother of punk fashion, Vivienne Westwood twists traditional outfit rules to make an eccentric and provocative collection that is especially appealing to Nina Hagen.

The great priestess of punk, the subversive and anti-conformist movement, Vivienne Westwood (born in 1941) began her career as a teacher, an institutional job if ever there was one. She did this until 1971 until her second husband, Malcolm McLaren decided to open a clothes boutique in London where she sold her first creations. McLaren was an rock group agent, for groups like the New York Dolls, precursors to a style that mixed sexual provocation with rejection of bourgeois values. He decided to import it to the United Kingdom and his shop would become more than a simple business, one of the punk laboratories of London.

His brand, which evolved over the years, carried nihilist and anti-establishment messages: "Let it Rock, "Too fast to live, too young to die", "Sex", or "World's End". Politicised, Vivienne Westwood was influenced by situationists and found herself with the Sex-Pistols who she clothed, publicists of her clothes as well as her ideas. Slashed T-shirts, dog collars and pinned leather became classics of her wardrobe, to which she then added Victorian corsets, dizzying platforms and tartan miniskirts, in a rebellious affront to British clothing conventions. That didn't stop her from being elected three times as the British Stylist of the year in 1990, 1991 and in 2001, influencing a number of fashion designers like Jean-Paul Gaultier.

A bit lighter. British fashion, which is highly awaited in Paris this year, during the ready-to-wear fashion shows. This morning, we saw the collections of John Richmond, the Englishman who dresses up rock stars, and, of even greater interest, we saw Britain's Vivienne Westwood last night. So, we often hear that British women don't have much taste in clothing. You are going to see that these British fashion designers are, in any case, at the forefront of what comes out nowadays.

A gentle nanny demeanour, but beware of this lady. My God! A friend of the Sex Pistols, the godmother of punk fashion, nowadays, Crazy Vivienne has calmed down. We have to sell, dammit!, always with an air of parody. Beautiful women from times past given a new, joyful look. Her thing is eccentricity: historic costumes. Borrowing from, transforming, mixing, just for the fun of shocking people. With Scottish outfits, with corselets and the quite fake synthetic fur coats, signs of those times. Marvelous, wonderful! Vivienne's fans loved it. The others would admire the nerve of these mischievous English people. And you, Nina, you like it, right?

I love this collection very very much, yes.