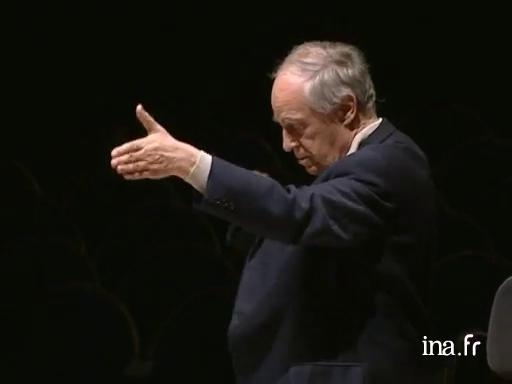 A Portrait of Pierre Boulez showing the composer and conductor in full rehearsal. Interview of Boulez and statements from musicians who work with him.

Born in 1925, Pierre Boulez has been the main representative of new music for over 50 years. He studied music in Lyon and then in Paris where he was a student of Andrée Vaurabourg, Olivier Messiaen and then René Leibowitz, who introduced him to serial music. His first pieces,Le visage nuptial, Le soleil des eaux, cast him amongst the up-and-coming young composers. He defended integral serialism: to apply the principle of series (12 notes in a scale in a tone row) to other musical settings such as duration, intensity and attack. In 1954 Boulez founded the Domaine Musical, a melting pot of new music for over 20 years. He worked with aleatoric composition (Structures). He was professor in Darmstadt for over 10 years, then in Harvard. In 1962 Pierre Boulez presented Pli Selon Pli, his most famous piece.

In 1974 he founded IRCAM which applied new technologies to music and looked after the Ensemble Intercontemporain. He also led a very long career as a conductor in Cleveland, London, Chicago and New York. He directed 20th century music, as well as contemporary, including his own works, but also that of Berlioz and Mahler and his participations in the Bayreuth festival are famous. His most recent pieces, often reworked, Eclat/Multiples, Messagesquisse, ...Explosante/fixe..., Cummings ist der dichter, Sur Incises..., mysterious, wild, often lyrical, are passionate and bear witness to the vitality of this rounded musician.

He would be a bit like a gardener, but a gardener whose garden always remains neglected. But only because this gardener wants it that way. And what Boulez wants happens immediately. Like correcting by hand, in the middle of a rehearsal, the imperfections of this score. To remain, at all costs, the master of the sonic labyrinth that he's creating.
(Music)

It's music that we're discovering, at the same time as he is, so he shapes it and we discover it. So you have to adjust to it, you have to find your auditory reference points, there's a genuine amount of creation that we don't get with Beethoven, in all of the works that we know and which play freely, three four and off you go.

The three four and off you go, we mustn't be mistaken, Boulez knows how to do it, and he does it majestically.
(Music)

But here, you're going to make it unconventional, because you push the right buttons.
(Music)

Making music and taking the risk of being from his own time period. That's his courage, his adventurous side.

For me, adventure is about, as René Char would say: "how to live without facing the unknown". You really have to do it, I don't move, you're the one that's moving relative to me.

Pierre Boulez, seventy-five years old, also remains a great instructor. A man who, through his devastating intelligence, knew how to direct and accompany five decades of musicians.

As long as I still have health, vigour, and the strength to do something, then I would rather continue working and thinking about the future rather than reflect on everything that's happened during the last fifty years.

And even though he was celebrated, awarded, and honoured like no other composer, he always refuses to look to the past, where glories are set or are transmuted.