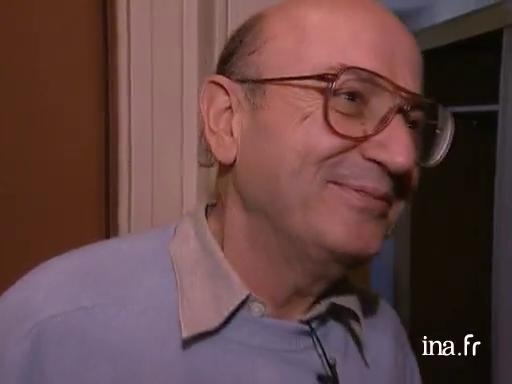 A report on Theo Angelopoulos who came back to the Cité Universitaire in Paris where he lived in his youth when he was a student. With the former Greek manager of the building, the director recollects memories from that time.

A student at the Cité Universitaire in 1962-63, Theo Angelopoulos (born in 1936) remembers his roommates as well as being expelled from the Institute of High Cinematographic Studies (that has since become La Fémis).

Back in Greece after this unfortunate experience, he would become a cinema critic from 1964 to the Regime of the Colonels in 1967. At around the same time as his compatriot, who was also Francophile, Costa-Gavras, Angelopoulos became a film director taking an interest in the history of his country and creating a trilogy that began in 1972 with Days of '36, followed three years later by The Travelling Players then in 1977 by The Hunters.

Despite the demanding and contemplative production style that used long takes, aesthetic, emotional and political power in his films earned him several prizes: his Palme d'Or for Eternity and a Day in 1998 came just before a grand prize at the 48th Cannes Festival forUlysses' Gaze in 1995.

"Mémoire des Lieux", Greek filmmaker Theo Angelopoulos, golden palm in Cannes for "Eternity and a Day", which will be released in approximately ten days, has agreed to play the "Mémoire des Lieux" game with us. Theo Angelopoulos happened to be a student in Paris and he agreed to remember the times when he was a student at the Cité Universitaire. It was during 1962-1963, we followed him, and he also found the man who was principle at that time.
(Silence)

There is change here.

There is change here, huh.

I remember there, I worked at that lodge to earn a bit of money.

You know who also worked in the lodge recently? The Greek ambassador who just left three months ago. He worked there the first time that he visited here [?]

I remember him. He was here during the same time period.

It was a bit before.

Myself, I remember, I worked here with Slavos, you remember, the sculptor who fell from his window.

He first threw all of his sculptures through the window and then he jumped. The former principle's wife said - because she saw the resident placing mattresses: "no, no, no, you're going to get the mattresses dirty".

This great sculptor, I tried to reproduce this scene, and it's a scene borrowed from Voyage to Cythera. A naked man who looks like a gull and tries to fly. He jumped and he said a few incomprehensible words, and then he jumped. The words could have been "everything that is born is born in the dark". And he was in the dark, really in the dark when he... And then he committed suicide a few years later, with one of his sculptures. I saw his sculptures in New York.

They are massive. And he also won the biennial in Venice. And I remember, he had won a sum of money, and in this room, he invited everyone to dance. And he spent all of the money he won to have this party. He invited everyone, but he didn't know how to dance, so he did it right there, during the entire time.

He was a forefather. Because right now, do people do anything different?

You remember something else? The revolution, with [?].

I get the impression that they changed the numbers.

The bedrooms are the same, the same sizes.

So it means that, there, that's the distortion of youth. There. I thought that the bedroom was bigger. And I see that it's very small, how could we live in there with a second person? You know, one time I was living with a German, there was a German in the other bed. In the morning, the German would get up and do gymnastics. And he played Beethoven every morning. But me, at night, I was there, I was there, I also worked in a hotel as well, as a night auditor. To save a bit of time, I would come home in the morning. So in the morning, he would wake me up with his gymnastics, and with Beethoven. I was crazy, I told him: "Listen, this isn't possible". He told me: "Come on, you Greek people, you're a bunch of barbarians".

Because, suppose that he played some Wagner, for example, would you have been ready to invade Poland, so to speak?

There was another one as well, who had many girls. So every time I got back there, I would see a little note: "Excuse me, I'm busy, come back after two o'clock". So I would walk around the park, I don't remember anymore. I would come back and knock, silence, he would tell me: "a little bit more, another half-hour". This is where I wrote my first script. It was a short script for the IDHEC. And that's also the reason I made fun of the IDHEC. They threw me out.

You weren't a good student.

Not a good student at all. No discipline. I remember that with certain friends from the IDHEC, we would go see "The Adventure" at that time, I don't remember how many times. Much later, when I met Antonioni, I gave him the thirteenth ticket. At the time, we would say: "We're going to take the Antonioni dose. My Parisian years, those were the best years of my life. Everything was free, all of the roads were open, absolute freedom, incredible. And Paris, Paris, it was more, I don't know, I get the impression that the streets and the people were more joyful.

We're always nostalgic about our youth.

Yes, well, in any case, you live with that. Memories aren't, I mean the past isn't really the past. It's present, it conditions us. We live with it. But I'm a bit moved, you know.