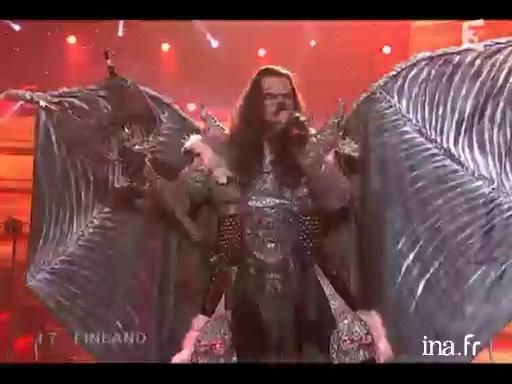 Representing Finland at the 51st Eurovision contest in Athens, the group of monsters Lordi sing Hard Rock Hallelujah and win the grand prize.

Created in 1996 with the help of singer Mr Lordi, this Finnish rock group offered a style that was definitely anchored in the hardcore aesthetic of radical heavy metal of the 80s by associating a "horrifying" stage image influenced directly by the visual mythology of contemporary horror cinema and heroic fantasy.

Influenced by the great names of hard rock (Kiss, Alice Cooper) the group were first noticed in 1996 by their first single Would you love a monsterman? followed by two albums Get Heavy and The Monsterican Dream) which met great public success in Scandinavia. But it was an unexpected victory at the Eurovision Song contest in 2006 (the first for Finland) with the title Hard Rock Hallelujah that suddenly propelled Lordi onto the international stage. This new-found fame has allowed the follow-up record for the group, The Arockalypse, to be distributed in Japan and the United States.

But they're coming to France!

"For the rock, Hallelujah", it's fresh, it's light-hearted, it's spring-like, it's simple, I didn't think the Lapps were like that. They'll be at the Vincennes zoo in September.

Finland has been participating in the contest for forty-four years without a win, and it's not with this that they're going to win.