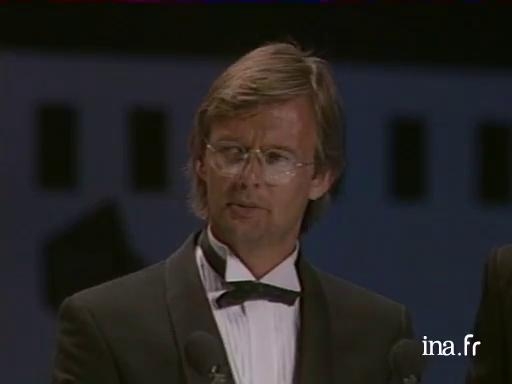 Excerpt of the 1988 Cannes festival award ceremony, where Bille August received the Golden Palm for his film Pelle the Conqueror.

When Gérard Depardieu awarded the 1988 Golden Palm to Bille August's Pelle the Conqueror, it wasn't so much a sign of the emergence of a new author as it was a return to the planisphere of a country that had been a bit forgotten since Carl Theodor Dreyer's masterpieces: Denmark. In fact, 1988 was marked by the success of the Danish film Babette's Feast, adapted by Gabriel Axel from one of Karen Blixen and Stéphane Audran's short stories along with the film Pelle the Conqueror, which also received an Oscar for the best foreign film.

Bille August (born in 1948), also a script writer and a photography director, made a film that was also rooted in the Nordic landscape; he relied on a solid Scandinavian cast and benefited from a subject that speaks to everyone (the relationship between an old man and a child), making it easy to export. The "formula" worked once again, and international success was at hand with August's The Best Intentions (1992), an adaptation of an autobiographical script by Ingmar Bergman, yet again with his favourite actor, Max von Sydow.

Due to your reactions. The golden palm goes to Pelle the Conqueror.
(bravos)

The jury wishes to highlight Max Foncido's exceptional contribution to this film.
(bravos)

Denmark has therefore had a happy year after Gabriel Axel, after the Oscar in the United States. Denmark is once again rewarded, here, with Pelle the Conqueror. Thank you for mentioning Max Foncido who isn't with us tonight. I'm going to ask you get up close, along with Gérard Depardieu, for the photographers who have already been waiting for an hour for this Golden Palm.

Thank you, because everyone agrees, it's perfect.

Gérard, if you would please stand next to the Golden Palm.
(bravos)

1988's golden palm, Pelle the Conqueror, Bille August, Max Foncido, the revolt of a young emigrant in Denmark, during the preceding century, who was hired, along with his father, as a stableboy. An excerpt of this film before we get back to all of the winners on the stage of the Palace.