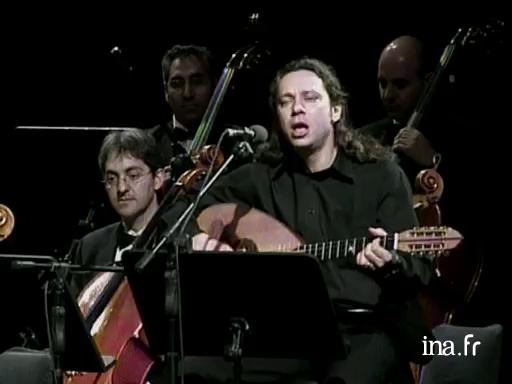 A concert by the Cypriot composer and performer of traditional songs, Alkinoos Ioannides, accompanied by the symphonic Orchestra of Cyprus and under the direction of Alkis Baltas. In this extract, we hear a performance of the piece The Feast of Saint George, which opened the concert that was given at the adoption of the euro by Cyprus.

Born in 1969 in Nicosia, he studied dramatic arts in Greece before pursuing singing at the age of 23 with his first album of songs written and set to music by Nikos Zoudiraris. His repertory is diverse, and ranges from traditional Greek or Cypriot music to classical music, and even a style more closely resembling rock.

In 2006, he released an album of traditional Cypriot songs with jazz violinist Miltiades Papaltamou whom he has worked with for a long time.

The song ofSaint George, a traditional Cypriot song that you hear in this excerpt opened the concert that was given on the occasion of Cyprus adopting the Euro.