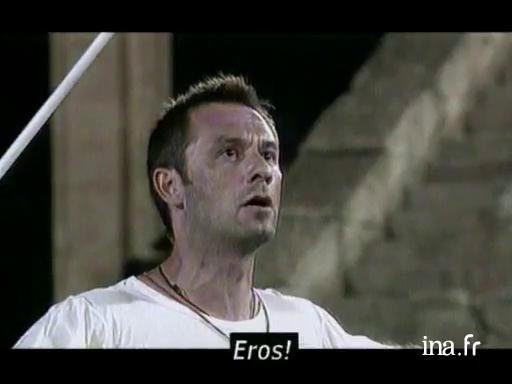 Extracts from the theatrical representation of Antigone produced by the governmental Cypriot organisation, The Cyprus Theatre Organisation, and given at the 25th anniversary of the Epidaure theatre festival. Interviews with the actress Annita Santorineou, the director Stavros S. Stakiris and the composer Mikis Theodorakis.

This adaptation of Antigone produced by The Cyprus Theatre Organization (THOC) marks the 25th anniversary of their participation in the Epidaurus theatre festival. It is in fact in 1980 that the famous Epidaurus festival, which was started in 1953, opened its doors to artists and companies that had never before had access to the festival, including the national Cypriot company.

The Cyprus Theatre Organization (THOC) is a Cypriot government organization that was founded in 1971 to encourage the development of Cypriot theatre culture, and to develop professional theatre relationships with Greece and other countries. Every year it produces all sorts of productions, from the great classics to experimental theatre, and they perform throughout the island and abroad.

The director of this adaptation, Stravros S. Stakiris, wished to incorporate Sophocles' great classic into contemporary life while giving the production a distinctly Cypriotic identity.

The performance includes a number of internationally famous artistic professionals, including the great Greek composer, Mikis Theodorakis, as well as actors from the screen and the stage, Antonis Katsaris (Creon), Annita Santorineou (Antigone) and Achilleas Grammatikopoulos (head of chorus).

From Argos with his famed horses does Polynices set off... with troops for seven-gated Thebes, setting claim to the throne.... from his brother Eteocles. . . The two brothers duel for the throne. Brother slays brother. And Creon becomes king... and decides: one to be buried with honours and the other... unburied to remain...

"A traitor and a law-abiding man I do not equate." "Only he who serves this city well will be honoured... in both life and death."

But here, in this theatre of theatres, in these impressive surroundings... I believe that the language of Sophocles... along with the Cypriot idiom which embellishes the performance... with its musicality... has a powerful message to pass on.

I wanted this to be a performance related to 2005. Sophocles has no need for us; he is and will continue to be... timeless, because his language has a flexibility and grandeur... which both fits and encompasses all eras. It's as if it was written before time itself... as if the playwright was prescient. We're simply giving performances... that contain such visual and interpretive symbolism... so as to conform with the theatrical achievements of our times... and converse with the theatregoer of today.

I suddenly find myself saying something which I loved... since a very young age. Something from my schoolbooks. I never thought that I'd be uttering... one of the best parts of ancien Greek literature... in this superb theatre.

The intention of the three of us, Stavros Tsakiris', mine... and Metchikov, was to try to capture certain energies... hovering in this space and to try and provide them with certain... paths of expression. It is a set which brings out the energy of each and every space.