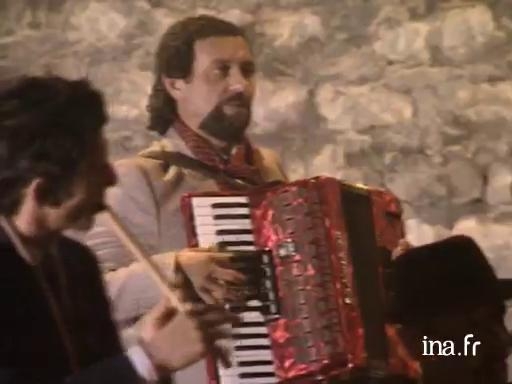 Report on the tsigane band Taraf de Haïdouks on the occasion of their French tour. Concert excerpts and a brief interview with accordeonist Ionitsa Manole who explains that the choice of instrument is transmitted from father to son.

Musical ensemble of Romany origin from the little village of Clejani in Romania, the Taraf de Haïdouks (literally, "band of outlaws") letter from nominal public success everywhere in the world since their recordovery at the turn of the 90s, soon after the fall of the dictator Nicolae Ceausescu, by the two Belgian musicians Stephane Karo and Michel Winter.

Formed of a dozen lautaris (traditional singers and musicians) whose ages range from 25 to 78 years old, this flamboyant orchestra gathers violins, and accordions, double bass and cimbaloms in the great Gypsy tradition, has accumulated in a few years world tours and successful records (Musique des Tziganes de Roumanie in 1991, Honourable Brigands, Magic Horses and Evil Eye in 94, Dumbala Dumba in 98, Band of Gypsies in 2001), spreading their first melancholic music on every stage.

gripped by the authenticity of its universe, the cinema soon took an interest in the group, Tony Gatlif in 1993 integrated into his film Latcho Drom and Marta Bergman and Frederic Fichefet produced a two-part documentary about them: The Snake Ballad - A Gypsy Story (1991) and Clejani in 2005. The group recorded a new album in 2007, Makarada dedicated to the music of Bela Bartok.

They are successful. Taraf de Haïdouks, they are a group of Tsigane musicians who are currently on tour in France. Beyond just curiosity, much success, then, for this orchestra that Laurent Lejop will introduce us to.
(Music)

While walking, while eating, while drinking, they never stop playing. The Taraf de Haïdouks, the orchestra of the bandit lawmen. They are between 17 and 75 years old. They come from Clejan, a small village in southern Romania. They are Tsiganes. Music, they feed on it. It's their memory.
(Music)

Where we're from, the kids, they take on their father's profession. My father, he's an accordian player. I took up the accordion. Like his father, he's a violinist, he took up the violin. There is always an instrument in the home, protection in the home. And the first dream of a music playing father is for his son to also become a musician.

Bandits, the Haïdouks. Maybe, but they have a moral: music, we don't learn it, we steal it and give it to others.
(Music)