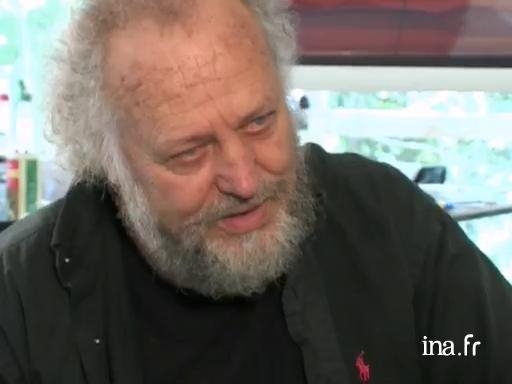 Conversation with Cypriot artist Nikos Kouroussis regarding his art, which makes much use of boat and rainbow images. He also mentions the coup of 1974, which resulted in the island being partitioned into two parts.

Nikos Kouroussis is one of the contemporary Cypriot artists who is most well known abroad. Born in 1937 in Nicosia, he studied at St. Martin's College of Art in 1960, then at the Hornsey College of Art from 1961-1964.

He explores different media - sculpture, painting, lithography ? in a minimalist and conceptual style. An engaged artist, Kouroussis expresses his positions and personal view of reality through his work. He draws inspiration from mythology, Greek cultural heritage, and elements of nature.

One of the dominant themes in his work following the division of Cyprus in 1974 is the rainbow, "symbol of peace and hope."

Over the course of the last forty years, Kouroussis has exhibited throughout the world, notably in Greece, Germany, the United Kingdom and the United States. He has represented Cyprus in a number of international biennials.

I always say things. (Greek) I always take a stance and have opinions through art. I take a stance and don't merely describe. (Greek) Description is somewhat outside the spirit of what I create. I try to get to the essence of that which I wish to express. In my own way of course, with my way of expression. After the invasion for example, I made works with a rainbow as the subject. Peace for me, peace as a rainbow.
(Music)

(Greek) A trip for me. That's the paper boat that came out of the imaginary trips I took as a child. The boats which I placed in the river and which travelled, so travelled my imagination. (Greek)

But the boats are many, one of your works has many boats that are no longer in the water. They are supported in the air. (Greek)

It's a violation, they take, they escape the natural and go to the supernatural. (Greek) At the same time, through the myth and, if you will, the poetry of Cavafy and the myth of Ulysses and his voyages, I take stances in the boat, I criticize. (Greek) The subjects I choose, for example, have to do with stances. (Greek) For example, the work "Across", the trilogy "Across", the sculpture is inspired, and I want to be careful with that word, inspired from the "destruction". (Greek) This work is inspired by the destruction of the towers in New York... (Greek) and I state that inspiration is destruction in drama, and to be inspired by destruction is...
(Music)

It's the cold inspiration, yes, but I want to remain a bit on the boats. Do your boats go on trips? Your boats take you on a trip and have experience of mysticism.
(Silence)

There is however a boat which does its last trip. That...

I am referring to Hadden's boat. Yes, that doesn't really concern me all that much, I will confront it.

Can I rephrase that?

(Greek) No, no need. It's a very interesting question. It didn't concern me. I am aware of this boat and this voyage but this boat symbolises other things for me. (Greek) (Music) The works I created after 1974, after the invasion... (Greek) all begin with a rainbow, a symbol of hope, a symbol of peace for all people, all religions, all these colours. (Greek) To me, this important experience I lived outside of my studio one October afternoon in 1974, when I decided that art for me, after the dramatic events I lived through and which everybody lived through, it doesn't matter if they call it art. (Greek) I also had confrontations which at one point were pushing me to quit art and become a fisherman, to go to the sea and fish. To live by the sea. I love the sea, I have a special relationship with it.
(Music)

(Greek) I want to return to the point I mentioned about the stance I took during the invasion, after the invasion. (Greek) After three months, I left the sea and returned to Lefcosia, and as I said, I was sitting outside of my studio thinking, being troubled. I was so undecided, so lost, I didn't know what was going on. (Greek) And suddenly, I saw across from my studio a cemetery and from this cemetery, in the dark grey sky, a rainbow emerged. From the cemetery, from amongst the dead. (Greek) And I see that nothing is finished... everything, there is an end and a new beginning. (Greek) And so, I started working again and since then, I have kept the rainbow as my subject.