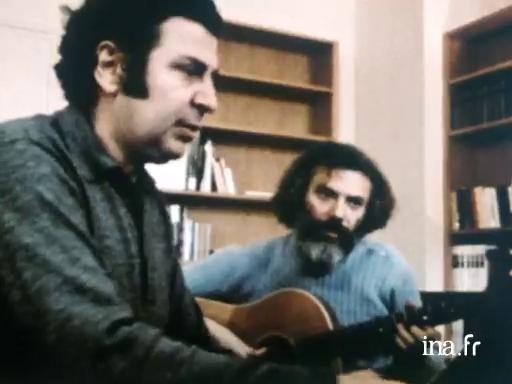 Work session between composer and Greek politician Mikis Theodorakis, recently freed from prison, and Georges Moustaki, who were set on adapting into French songs that Theodorakis wrote while imprisoned. Each one singing in his own language, the two men played Nous Sommes Deux in duo, while playing guitar and piano.

Born on 25 July 1925 on the island of Chios, Mikis Theodorakis is one of the biggest artistic and political figures of modern Greece - the universal symbol of the Hellenic cultural renaissance. Very active in the resistance against the fascists during World War II and the following Civil War, Theodorakis renewed with his first musical loves in 1950, obtained his degree in harmony and enrolled in the Conservatory of Paris, in Olivier Messiaen's class.

Although his writing talent was quickly recognised internationally, Theodorakis started his own cultural revolution at the turn of the 1960s, by rediscovering his country's popular music: Epitaphios written over Yannis Ritsos's poems is now considered to be the founding act of Greek music's renaissance. Very involved politically, he took control of the Lambrakis Democratic Youth and was elected to parliament. At that same time, he gained international fame with the score to the film Zorba the Greek (1964).

In 1967, the Colonels' putsch forced him into exile. He settled in Paris and became the symbol of resistance against the military junta until his triumphant return to Greece in 1974. Extraordinarily prolific, Theodorakis had not, during all of these years, stopped composing - operas, symphonies, oratorios, song cycles, theatre and film soundtracks: to this day, his work includes more than 1000 listed works and his discography contains no less than 250 titles.

So if the tone is right, I'll start and see

That's good we are two, that, that's enough

Because you mention it, we are two

At midday, he knocks on the office door, I count the knocks, I count the pain, I am a sick animal in the abattoir, today it's my turn, yours tomorrow.

Behind the wall we meet new people That is, they meet

They are him, yes, he comes, because to him, he is in the cell next to me. When he came down from the terrace, that's when the conversation started la, la, you la, la, me [Greek]

No because I heard in particular the...

sing in French There are still things I want to change