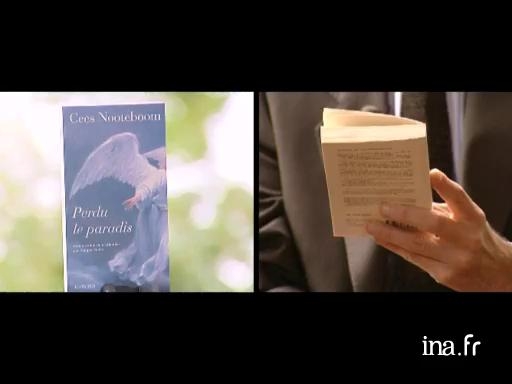 Cees Nooteboom, from his real name Cornelius Johannes Jacobus Maria Nooteboom, was born in 1933 in the Hague, the Netherlands. As an adolescent, he had difficulty at school in an Augustinian Monastery. At 20 years old, he hitchhiked around Europe. This trip was the main subject of his first novel, Philip and the Others, published in 1955.

Passionate about Spain, Cees Nooteboom satisfied his passion for travel thanks to his job as a journalist for the Netherlands reviews, "Avenue" and "Elsevier". He travelled the world over, ceaselessly writing novels, travel stories, poems and philosophy. he received the Pegasus prize and the Aristeion prize in 1993 for The Following Story. Amongst his main novels, one can cite the collection Mokusei! A love story (1982), the novel All Souls' Day (1998), appeared with Editions Actes Sud (as Le jour des morts).

His novel Paradise Lost, appeared in 2006, following the wanderings of two Brazilian women of German origin and offered a reflection on the confrontation between tradition and modernism through the evocation of Australian aboriginal culture.

"She has a window seat, one row in front of me to the left of the central aisle. To be quite honest, it's better than being next to me since that way I can look at her freely. She has long legs, in khaki linen trousers, a masculine feature that makes her even more feminine. Large, strong hands that are removing the crimson packaging, carefully tied together with scotch tape, from a book. Her big hands don't have the patience to wait. If the scotch tape doesn't give way soon, they'll rip the packaging off. I'm a voyeur. One of the great pleasures of the trip is spying on strangers who don't know that they're being watched. She opened the book so fast that I didn't have the time to see the title".
(Music)

An excerpt from one of the first pages of "Lost Paradise", Cees Nooteboom's latest novel, translated into French by the Acte Sud publishing house. At 71 years of age, Nooteboom is one of the most renowned Dutch writers. And his character, who's also a writer, resembles him quite a bit. He's a travelling writer who's used to symposiums and teaching sessions that are far from his country. We're now in Sao Paulo in Brazil, and this time, it's a woman who's holding the pen, Alma, a Brazilian originally from Germany, just like Almut, her best friend. Both of them fell in love with Australia, where they ended up settling after their physiotherapy studies.
(Music)

Alma is living a love story with an Aboriginal painter, this original people which they both had a completely fantasised image of and which an English writer, living there for half a century, will correct. Furthermore, their trip continued all the way to Perth, in Western Australia, where they're participating in a theatre festival. For them, Australia was based on a quote unquote "misunderstanding", "this superb word" Nooteboom wrote in conclusion "which founded all literature, from "Othello" to "Madame Bovary", including "In Search of Lost Time"".
(Music)