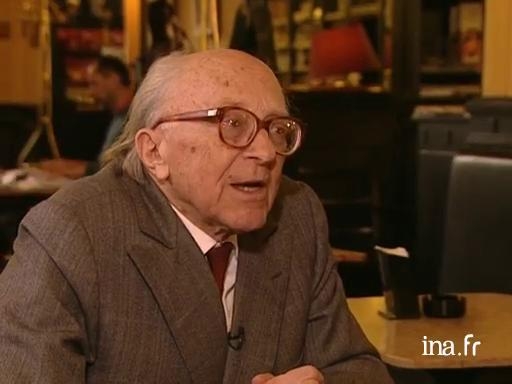 At a table in Trieste's San Marco café, Slovenian writer Boris Pahor talks with Olivier Barrot regarding his latest novel, In the Labyrinth, where the city of Trieste is the main character. The writer says that he's happy that Slovenia is back in the new Europe.

Of Slovenian origin, Boris Pahor was born in 1913 in Trieste. This town, Italian until the end of the Second World War, had been the cradle of the Italian Fascist party, Pahor's childhood had been influenced by the harassment and censorship against his community and against his language.

It was certainly with the memory of the Slovenian culture house fire caused by Italian Fascists in 1920 that would lead him to join the ranks of the Yugoslavian liberation Army in 1944. Arrested for resistance before being deported to Alsace then to Germany, he tells of this tragedy throughout his work in Pilgrim among the shadows (1995) but also in his trilogy (Struggling with Spring, Jours Obscurs, In the Labyrinth), which tells of Radko Suban, his alter-ego.

His novels, amongst which The Garden of Plants or Appel du navire, all presented a strong autobiographical dimension, while painting a loving portrait of the city of Trieste. Pahor remained a veritable ambassador of Slovenian language and culture.

"In the Labyrinth" by Boris Pahor, the third volume of this vast ensemble published by Phebus, is the novel of the Slovenian minority in Italy. Can you tell us the recent history?

The English, the Anglo-Americans, they came to Trieste almost at the same time as the Yugoslavians, so they gave us the schools. That is, we rebuilt everything that fascism, over the course of 20 years, had destroyed in our country.

The main female character of your book is a French woman, Arlette, that you knew a long time ago, and you kept a long correspondence with her, it is a great love story.

Listen, that is when you speak of love in my books, and when you speak of when, no, it's often, no, three-fourths is autobiographical. There is a woman I met in Paris, that I met in France, and it is very autobiographical, I tell the truth. It is unfortunate, it is unfortunate that she did not have the courage to follow when he leaves, she finds him, but is not, is not happy. She has a good husband who loves her very much, but whom she not in love with. This sort of, of love by letters, if you will, no, it is not only epistolary, because epistolary loves are not real loves.

"In the Labyrinth" in the end is a novel of Trieste, the main character is the city where we are today.

That is true, it is the city. It is the city that I love, and it is a beautiful city, which needs to be recognized. And that one time, she said, it was a city of riches. The Triestins, by tradition, are people who were, there were, one could say, well endowed financially, you understand no?

So welcome to the new Europe that is beginning these days, Boris Pahor, this return of Slovenia to Europe, does it make you happy or miserable?

I could not be unhappy because that means that now, if everything goes well, we will be reunited. There is an opening, giving Slovenia the possibility to have a sort of communication between the parties that were separated, you see. That is good, no.
(Music)