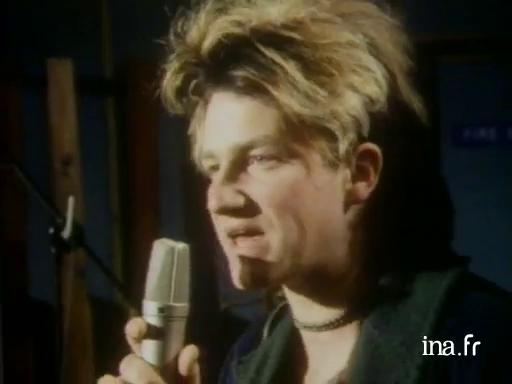 A report on the group U2 as they released their third album War. Interview with Bono, the group's singer, alternated with extracts from New Year's Day, Sunday Bloody Sunday and Two Hearts Beat as One.

An Irish rock band formed by Paul Hewson (known as Bono) on vocals, David Evans (The Edge) on guitar, Adam Clayton on bass and Larry Mullen Junior on drums - U2 recorded its first two albums at the beginning of the 80s, Boy and October, which earned them positive feedback from both listeners and critics.

However, it was with 1983's War album, with its lyrical and "heroic" songs (Sunday Bloody Sunday and New Year's Day were openly committed to the northern Irish and Polish conflicts), that the band was able to change dimensions, from both an artistic and commercial standpoint. For its 4th album, 1984's The Unforgettable Fire, U2 called on producers Brian Eno and Daniel Lanois and found new life. Bono's political commitments became increasingly explicit, and in 1985, U2 participated in Bob Geldof's Live Aid show against African famine, and in the 1986 Amnesty International tour "A Conspiracy of Hope". In 1987, the band's The Joshua Tree was its biggest international success. They were on the cover of Time Magazine: the U2 phenomenon went far beyond just music.

From the 90s on, the band spent more and more time playing live shows, alternating between conceptual albums (Achtung Baby in 1991, Pop in 1997, All That You Can't Leave Behind in 2000, How to Dismantle an Atomic Bomb in 2004) and triumphant world tours ("The Elevation Tour" in 2001, "Vertigo" in 2005). It is estimated that U2 has sold close to 170 million albums worldwide.

With War, their third album, U2 are continuing what the Clash have done, and precede the Cure, Simple Minds and Depeche Mode as the leaders of the new wave. Bono still has bleached hair, but like the young boy on their first album cover, he has lost his innocence. On the other hand, he learned one of the most important rules of creation: analysing what goes on around him and applying it to the rest of the world. Armed with this original strategy, U2 is declaring war on war. Their first camouflage goes back to their origins, though. It's their name.
(Music)

It's just a letter and a number, so that people wonder what is behind it, who those people are, and it's much more important. The name is very ambiguous.
(Music)

What's not ambiguous is the name of the album: War. Is this linked to what happened in your country or does it have a more general application?

It's about war on a less apparent level. It's an emotion that we express. Conflicts and struggles on all levels. For example, the war between lovers, in homes, in the streets, the urban tension, and of course, a song such as Sunday Bloody Sunday which we wrote about our country. A song which we've held back for a long time. An idea which we believed in. We wondered how long we should sing it. It's a song about disgust. Even though this album is called "War", it talks about surrendering. We use big white flags on stage.
(Music)

There are also ego clashes. Ambition, those who walk all over others, "Surrender" says that, in one way or another, you need to be able to get rid of what's dead inside of you. The theme in "Surrender" is very important: seeing things from a distance. We've been told repeatedly to stand up for our beliefs, to not let anyone tell us anything else. It seems to imply so many underground conflicts. People stand up for their ideas, but I believe that it's sometimes good to withdraw.
(Music)

I want my life to be what's most important and for truth to be the starting point.
(Music)