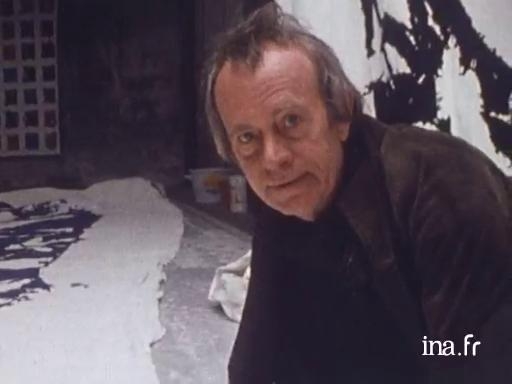 Portrait of painter Simon Hantaï. In his studio, he shows his paintings - done on huge canvases - and he brings up his career, his projects, his pictorial theories.

The Hungarian painter Simon Hantai, born in 1922, is an active artist who has brought a true reflection to the act of painting and the place of art at the end of the twentieth century. After joining the surrealists on his arrival in France in 1949, he split from them as others before him had, faced with the inflexibility of André Breton. The latter refusing to recognize the link between the action painting of Jason Pollock and automatic writing that aimed to impede reason and preconceived ideas from being expressed through quick and spontaneous writing. This gestural unpredictability, the rejection of traditional methods of expression formed the basis of Pollock's work, and then Hantai's.

Influenced elsewhere by the flat tints of Cézanne and Matisse's cut-outs, Simon Hantai would perfect his "pliage (folding) method" in 1960. The canvas, stripped of its stretcher, is folded, knotted then coated in paint before being stretched out to reveal itself, a real revelation to the eyes of its creator. At the beginning of the 1980s, while at the height of his fame, Hantai retired from the artistic scene for 15 years, and refusing to participate in the commercialism and institutionalism of artists. As a disillusioned situationist he deplored the lack of critical sense in his contemporaries, " they all worked for the embellishment of society. (...) Art has been neutralised, it has become something like a social service".

The painting that Simon Hantai is doing at the moment is influenced by the work of Cezanne, that of Matisse and that of Pollock, a collection of authoritative influences. The work of Jackson Pollack obliged Hantai to attempt to fundamentally renew the situation of the painter within the field of painting. In order to paint a new picture, it's necessary to face the unknown and make sure that this unknown remains unknowable as long as possible, that's how Hantai's folding started in 1960. Folding his canvas before painting it, Hantai removed any possibility of knowing in advance what he would be painting. He also skipped the basic image control during painting. His way of doing this was to blindfold himself, and genuinely feel his way along. It's in the context of this self-created night, that Simon Hantai set about interrogating Cezanne and Matisse. He was bound to questioning these two painters, a questioning which you could still say today, he never finished and from which he wanted draw conclusions. Cezanne made him certain that the way of the modern painter consisted in expression by colour. The strength of the colour is the only thing which can give the shape its fullness and to realise the construction of the world. Cezanne also gave Hantai the proof that the modern painter's method was to develop white as much as the painted areas and that the coordination between painted and non painted could and should be set out in such a way that they can breath, where not one p From made Hantai develop a painting which declares itself: found. The paper cut-outs are the part of Matisse which most particularly fuelled Hantai. Matisse cut by hand into colours considered to be the universe, he even specified the colour of the shapes that he then moved and spread out on white considered to be the law of the world. He wanted to sublimate the colour in light, a light of the mind, the only light both to be an ultimate source and response of the inspiration. Matisse wanted to give the perception of something, which basically wasn't paint. Hantai drew confidence in these kind of things from his predecessors, and that's the strong point of this confidence, which he moved towards without being summoned, radically towards himself.
(Silence)

These very big paintings for the central space of the CPRC at Bordeaux, do they represent for you the most radical way of getting into the problem of colour?

The beds which have a very strange architecture, which remind people of the arches of little churches, that is, it's lit up from above by the windows,

seem to be just a possibility to attempt to fulfil many projects that I have done previously, and notably, enlarge them, by the quality of the colour, the radiant intensity, and to see which modification that produces in the internal structures of the pai And that, and in relation to the question which Matisse posed that a square centimetre is less blue ...

Than a square metre.

A square metre. Imagine for example that I have a monochrome surface 12 metres by 9,

And I'm going to fill it with a single colour once it has been folded. That is, you have an experience of displaying colours, which sort of burn your eyes which produce a connection to the everyday experience, a limited experience, and that is something that the Western painter has never tried. And in view of the fact that, up to now, the painter has been a compound painter, he was always filled right up, except the later Cezanne, and in all of Matisse's works at the end.
(Music)

Everything which I have thought about is, on the theoretical or scientific question, does colour still remain? The theory of colour such as it has been practised, thought about by painters, up to the end of the XIXth century, with certain exceptions, is a certain area of colour, a certain strength of colour, notably heavily marked by the preoccupation of colour lo The only place where a break appears, is Cezanne, he produces something which is a break from filled space. Cezanne is the first painter who said, of a space with a hole in it, that I can't finish it because if I put anything on this unfilled white canvas, at this time, in relation to this colour which has been put, I'd have to re-do the whole canvas. Within his work appeared something which is, which he had observed in Aix nature in front of the Sainte-Victoire mountain, which is a very distinctive sort of nature. There you have a sort of huge white mountain completely delocalised from the landscape, and from that moment, all objects, trees, rocks, everything, appears not to be lit by the sun, they are just there in order to make the broken light work which forms a During that work, you see his awareness that, it may be necessary never again to finish a canvas. And maybe there is the basis even for this change, there colour doesn?t function as before. Habit, a relationship of, of complementarity, all that, doesn't feature.
(Music)

In Matisse I have seen, the great conflict of his life was that he had a separate design after he put on the colours, each time he had to modify the designs. At a certain moment, given his maturity, he came to do a series of designs where the line purely distributes white. That is to say it doesn't function as a line of something, but only to distribute certain styles of white, and these whites are in the spirit of Matisse's coloured works. So if I work, a painting, I put there, one colour next to the other, filled, if that is done well, I won't worry about the questions which were opened by Cezanne and Matisse. Because you have to broaden that, that is to say I say much more than Cezanne and Matisse know about that, to the extent that I think about it.
(Music)

And colour, in this way can only enter a non-central space and possibly pour back from the space. But from this perspective, everything is grey, of a grey colourless front, Cezanne when he looked at that, surely he become totally lifeless. When I paint for one or two hours, everything is dirty. I mean that all colour takes over, the intensity of colour takes over, let's say it weakens the eye or it kills it partially in a certain way. But it certainly exacerbates the faculty that you normally don't use, and you suppose that in an inverted space with a gap in between, that is to say where distances between the two colours are so big that normally the eye which usually reads the colours In this sense, if there is no gap with Cezanne, if there is no gap with Matisse, on the white paper, that doesn't work. The colour there, is not set in order to be seen, look at me I am so beautiful, one next to the other, I see, I make a harmony, it is there in order to disappear in favour of something else. There you are. So there you have it, there is a new notion of painting which can be approached, if you give up tactility, beauty as Cezanne or Matisse gave up afterwards in order to make the ugly paper cut-outs, in favour of this completely straight beauty, which tactil From that moment, there is this qualitative deterioration in natural senses. It's less beautiful tactilely than all the others, but it's another absolutely superior beauty if you like. That is to say, it comes from a completely different palette which comes within the field of work, and I know that yellow works in a certain way, that is to say it flow into lilacs, in certain ways, not in the best way. Because in complementary conditions, it will work in this way, or green will go with pink; etc...
(Music)

When you ask Matisse, what will the future of painting be? He said: it isn't colour, it's no longer colour, it's light. That is to say there is the distinction to make this function of colour, is essentially linked to light and not material. It's the only thing which interests me given the fact that this perspective seems to me totally dazzling. In the folds, as I painted, the white and the long painting appeared, more and more actively, at the end it was practically the only thing active. All I want to know about it is, it's both a material history, both an optical history and at the same time, especially spiritual or soul, a question of soul or when I don't know what word to describe poetry. That is to say, the light is unavoidably the basis of the world, on an absolute material level. And it is just the sign and the symbol of another infinity. You go deep, it is necessary for you to go into the hole, that's the opening. It's inevitably, this opening into infinity. I want to say that it's not a question that I want a response with which I assure myself of something, I just don't want any response. I want absolutely no response, that is, infinity.
(Music)
(Silence)