Interview with Ivan Klima regarding Love and Garbage 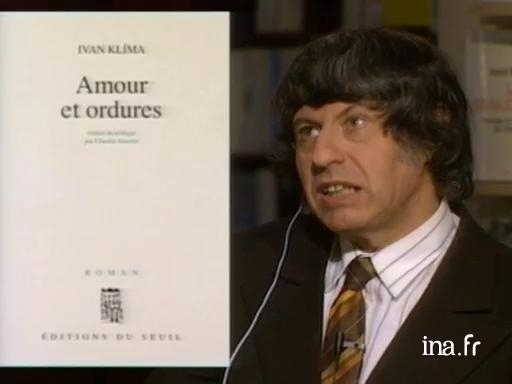 Interview with Ivan Klima on the sources of inspiration for his novel Love and Garbage and his experience as a street sweeper.

Ivan Klima is one of many Czechs to have lived through the horrors of Nazi occupation during World War II. Born in Prague in 1931, he was deported (he started writing at the Terezin concentration camp), and then, when he was back in Prague, he lived through the Stalin regime of the 1950s, followed by the Prague Spring, the 1968 Soviet invasion, and 1989's Velvet Revolution. He wrote essays, plays, novels and short stories. Censored for twenty years in his country, he had to sweep floors and drive ambulances to earn a living.

His works, including the novel Love and Garbage (1990), and the essay The Spirit of Prague (a dialogue between Philip Roth and the writer which combined autobiographical memories of his deportation along with thoughts on totalitarian regimes, published in 1990), were translated into approximately thirty languages and made him one of the most famous contemporary Czech authors.

So, "Love and Garbage", it's about, to describe the book, it's about the thoughts of a writer, who has become a street sweeper, in the streets of Prague, and who therefore lets his spirit and his memories run free. And of course, when we're familiar with your story, we think, and I think that we're wrong about this, about an autobiography, but then we tell ourselves that you weren't a street sweeper but you must have had these sorts of jobs, right, when you were, wh
(Silence)

I was banned from publishing for 20 years. I had all sorts of short-term jobs, and I was a street sweeper, but only for a few days, to be able to write this novel. Since my main theme was the love problem of the hero, who is torn between his wife and his mistress, and which is a common story. So common that I wanted to say something about our contemporary society through this story. And that's where I got the idea that trash is a metaphor for our civilisation, because this civilisation, which makes all sorts of things, all sorts of objects, creates a massive amount of trash. Each object that is made creates a problem: how do we get rid of it afterwards? What do we do with the trash? So there is the production of material trash, there is also the production of spiritual trash, within the mind. So when I got this idea, I wondered how could I integrate this metaphor into my novel? And then, I got the idea of interpreting this idea with the help of this street sweeper. So my street sweeper was a writer, I was a writer, I actually only had access to this type of job, so I became a street sweeper. It was very easy, I was hired right away, and so I learned the profession, it was in fact an excuse to be able to talk about this subject.

So, yes, this man wearing an orange vest, this street sweeper, is a very active writer, and therefore an observer, but also, this way of strolling through the streets, of working with this team of sweepers who are just like him, all of them more or less o And when we read this book, we get the impression that it's a bit of a collage. [MISUNDERSTOOD] said in his book: you don't choose the order of your memories, just the narrator, so you don't either.

Yes, this collage, it was the idea that interested me the most when I was writing this book. The author must get pleasure from writing a book, so he needs to find something new, and this collage method was very rewarding to me. Thereby explaining the memories and this news that relate to each other and portray the world as it is. I also have to say that in addition to stories about street sweepers, and their destinies, the characters are somewhat, in large part invented, so that the book is interesting. I found people that could be interesting, that were more or less from this environment of outcasts, but I turned them into street sweepers. So, if you will, it wasn't because of any social or material need that I wrote this book, but because many of my co-workers, they've had to endure such jobs, so I wanted to tell the story of an intellectual from that time period which is, in fact, a total And when I was sweeping the streets where diplomats lived and when they saw me pass by in the street, wearing my orange outfit, a lady passing by exclaimed: "Look, there's an author over here who is sweeping!" I explained to her that it was to write a novel, so that people wouldn't say that I became a victim of the situation. I really had to become a street sweeper, it was in fact sweeping research. So this sweeper theme is kind of like the main theme, one of the main themes of the book.