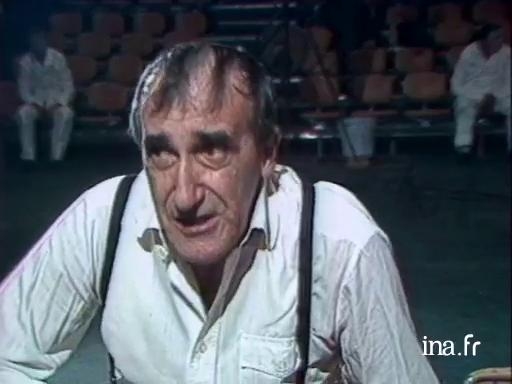 Stage rehearsal of Where Are the Snows of Yesteryear, a play written and directed by Poland's Tadeusz Kantor, who is a guest of the autumn festival in Paris. He discusses the state of the siege in Poland.

Plasticien, director, writer, scenographer and experimental performance producer, the Polis Tadeusz Kantor is an influential figure in post-war theatre. Born in 1915, he studied at the Krakow fine arts in the 1930s. Influenced by Dadaism, Constructivism and surrealism, he created a clandestine avant-garde theatre in Nazi occupied Krakow where his art, that he called "theatre of the dead", revealed a powerful plastic view.

From 1955 the clandestine theatre became the group Cricot 2 whose unique style productions, dreamlike almost, illustrates both Kantor's childhood memories and Polish political context. Present on stage, he became the secondary protagonist of every performance. International renown came with the troupe's participation in the Nancy Festival in 1971.

In 1975, withThe Dead Class, by Witkiewicz, Kantor left his experimental period and created a personal and mythical piece, where old folk carried mannequins on their backs, ghosts of their childhood. WithWielopole-Wielopole(1980), he castigated family, religion and war. His last piece, Today is my birthday, was only produced after his death in 1990.

And now, a theatrical page, with, for a certain number of you, the discovery, tonight, of Tadeusz Kantor, one of the five directors that matter, today, in the world. He is once again, until tomorrow, the guest of the autumn festival with a show that only lasts a half-hour, and which leaves audiences in wonder. A report by Martine Chaussin and Daniel [Maillaud].
(Music)

Tadeusz Kantor is Polish. He isn't in exile, he stays in Poland. He is nevertheless known throughout the world, thanks to his pictorial work, as well as his directing work, with the troupe he created in 1943 and which was called, at that time, under Nazi occupation, the Experimental Clandestine Theatre which then became the Crico Theatre. He presents a show that he baptised Cricotage while thinking about a collage, an assembly of elements borrowed from reality, with no apparent narration.
(Music)

It's, in certain ways, it's the method of surrealists. There is the moment of surprise, the surprise of things that are not expected.
(Music)

Is it possible, in Poland, for artists to cohabit under martial law?

It's possible, because we play in theatre. The actors, they play. The theatre works.

And do you think that the state of siege will end?

The state of siege in Poland will end?

No, must terminate. It's not possible to live in... Myself, I lived through the war, 4 years, it was a terrible war, yes. And even during the 1940-1944 war, I did the Clandestine Theatre, which I considered to be my best 4 year period.

Are you going back to Poland soon?