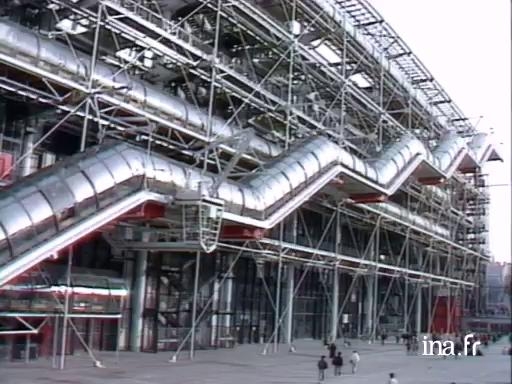 The Italian architect Renzo Piano explains what he wanted to create by designing the George Pompidou Centre in Paris.

From a family of father to son builders, Renzo Piano studied in Milan and Florence under the direction of Franco Albini, a renowned neo-rationalist with whom he would work. In 1965 he moved to Philadelphia, headed for a Louis Kahn agency. It was at this time that he made friends with Jean Prouvé. He founded his first agency with Richard Rogers in 1971 and won the Centre Pompidou international competition with a provocative offering inspired by Cedric Price's Fun Palace. For a while associated with Peter Rice, he opened his Renzo Piano Building workshop, bringing together over a hundred collaborators from Gênes, Berlin and Paris where he now lives.

Renzo Piano approached architecture from the "doing" tradition, elaborating his projects from in-depth research into materials, their implementation and control of the whole working process. He mixed his training of British pragmatism and Mediterranean traditional craftsmanship in buildings filled with the places history. In Japan, the streamlined Osaka airport, through its curved shapes and steel structure, reminds of the sea that surrounds it. In New-Caledonia the Jean-Marie Tjibaou cultural centre pavilions, in African iroko wood, take their inspiration directly from the huts of the Kayak culture to which the centre is dedicated. He was awarded the Kyoto prize, the Pritzker prize and the Médaille d'Or from the International Union of Architects in Berlin.

I believe that there was no choice and the cultural institutional buildings sort of intimidate people, I would say, people who are not cultured. And there, the choice had been rather just to make a different building, a sort of machine, a tool which people could be a bit curious about. But which had nothing to do with intimidation. You know, we have often been told that they are building a supermarket, a hypermarket. And that always pleased me in the end since nobody is afraid of going to a hypermarket. It's just that you are blamed for the building not being integrated into the historic Parisian site. I believe that it was totally clear from the start that it was necessary to create a void. Moreover the void already existed since you mustn't forget the plateau Beaubourg since 1935. A sort of huge car park. It grew a little bit, a sort of large clearing was created in which you could land a big spaceship. With that we wanted to introduce into the building a sense of curiosity, curiosity for something different. And for something which was at the same time familiar. Because the machine, we mustn't forget it, is very familiar to our lives in our century. The building was conceived as a sort of stratification of different functions. There is the library, but there is also the museum. There are temporary exhibition rooms. The idea of the escalator, amounts to saying that the different functions are cut up diagonally and you manage to create the situation very simply, where, by chance, the person who has come to the centre to visit the library. at the same time find themselves at an exhibition where maybe they go up to the roof for lunch. They discover still more activities. I believe that you can't think of a more simple way of doing things. Since you would have lost the interesting side, the rich side, the events side that you wanted to create.