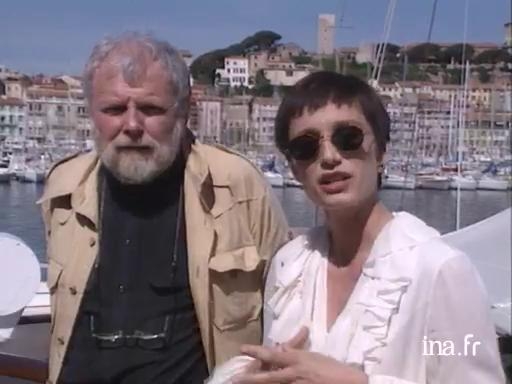 Following an excerpt of An Unforgettable Summer, Lucian Pintilie and Kristin Scott Thomas, the main actor, introduce this film which is in competition at the Cannes festival and which takes place during the 1920s, during the Romanian and Bulgarian conflict of the Dodroudja region. Pintilie talks about the childhood memories that inspired the film and of the message he wanted to convey during the current political context.

Romanian filmmaker Lucian Pintilié, born in 1933, owes his fame to theatre more than anything else. With artistic and political audacity, he staged approximately thirty plays in his country, up until 1972, when the Ceausescu regime forced him to exile himself in Paris, where he pursued his theatrical activity.

Back in Romania in 1992, Pintilié, who was always very interested in radio and television, kept making films that outlined what was done in the 60s, with films such as La Reconstitution, which was a forbidden fable in its day (1969). He is interested in giving an account, in a satiric tone, of the state of a European country that was torn apart and impoverished by dictatorships and nationalist conflicts.

Several film genres were therefore borrowed from and combined with success. A lush and picaresque fable (Balan?a, 1992), a historical chronicle (An Unforgettable Summer, 1994), a politico-symbolic detective tale (Prea Târziu, 1996) and a slapstick comedy (Niki Ardelean, Colonel în Rezerv? , 2003) all are part of a smart and powerful collection of work, exceptionally dense and whose ultimate film just might be Dup?-Amiaza unui Tor?ionar (2001).

He could have found his inspiration in the newspapers. To speak of the rise of nationalisms or of ethnic cleansing, Lucian Pintilié, a man of theatre, Romanian filmmaker, situated the action of "An Unforgettable Summer" in the 1920s, when Romanians and Bulgarians were fighting over an expanse of land. The wife of an officer follows her husband, charged with keeping order, and she discovers the folly of men.

Why did you beat them?

Damn! I have an order to shoot them all.

What do you mean, shoot them?

Yes, shoot them. We escort them to the woods and we execute them. As pay back, to show the Bulgarians

No, I know no! But I am an officer. An officer executes orders.

It was 100 kilometers higher than the region where the action takes place, and I lived with a dozen of different nationalities, and the memory of my childhood is completely idyllic. Within an ethnic mosaic, the memory is idyllic because, at the time, we had no interest or preoccupation to destabilize the region. As soon as there is the motivation to destabilize a given region, then people always sell the myth: heritage in danger, and the ethnic delirium, it is unleashed from one day to the other.

It works with astonishing efficacy, because it is the most primitive thing: to provoke confusion, with, by the intermediary of an injection, there is no need for years and years. An injection, like that, and we immediately plunge into folly.

One can never do what must be done, never. I have the impression that it is never possible, and I do not know what I would have done in that situation, and I am sure that it will make people think: what would I have done?

It is forbidden to speak with them.

What is it, Petco ? Where are you going, my friends? I haven't paid you!

You understand Romanian no?

Madam, they are going to kill us!

Do not be childish.

They are going to kill us.

Why? You haven't done anything! I do not have the right to speak to you... When you will be free.