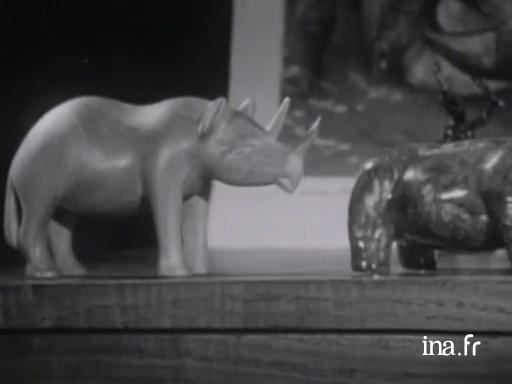 Conversation with Eugène Ionesco, who speaks of his youth spent between Romania and France, and how he became a playwright. He then explains himself on his theatre works, on how he is perceived, and on the meaning of the word "absurd".

Eugène Ionesco (1909-1994), a Romanian playwright, spent his childhood in France and then taught French at the University of Bucharest. He went back to France for good in 1938, where he published a large number of plays. Mere mention of his name first brings to mind his theatre and the wave of dramatic innovation that followed him after the war. Also, we almost immediately think about The Bald Soprano (1950) and The Lesson (1951), played without interruption at the Théâtre de la Huchette since 1957.

His penchant for caricature, humour and ironic comedy place him amongst the destroyers of social conventions and illogicism, ranking him alongside the founders of the Theatre of the Absurd . His biggest successes are Rhinoceros (a play staged by Jean-Louis Barrault in 1960), a play that denounces totalitarianism, and Exit the King (a play written in 1962), which confronts man with the agonizing question of his death. His works seek to demonstrate the tragedy of our Western modernity, while revealing a language crisis. He was elected to the French Academy in 1970.

Hello Nicolas. How are you?

Hello Odette, how are you? Well, yes, it's Ionesco.
(Music)

You've just heard a scene from his first play, "The Bald Soprano".
(Music)

In the month of May, in 1950, it was performed for the first time at the Noctambule theatre, a small theatre on the left bank. 10 years later, Eugène Ionesco is now recognised. His works have been translated into every language. In Paris, he is listed alongside Claudel, Anouilh, Marivaux and Shakespeare in the French theatre repertoire thanks to Jean-Louis Barrault. Here, at his disposal, the general public, the great theatres and the big stage production displays.
(Music)

There. My children, I thank you. Now, all I have left to do is to put the Hun. Put the Hun and see you tonight. Thanks again.

For some, Eugène Ionesco, the author of Rhinoceros is the modern-day Aristophanes. For others, he's just a cabaret singer who read Kafka. But a creator isn't responsible for the literature that is derived from his works. Ionesco, who has never, until now, explained himself in front of viewers, is going to tell us himself where he comes from. Eugène Ionesco, where does your name come from?

My name is Ionesco, like my father. Ionesco means Son of Jean. My father was Roumanian. This name is very common in Romania, like the Danish Jansens or the English Johnsons. Ionesco is Martin, Dupont and Durant united.

But you have a very deep French cultural background?

Yes, I'm a French citizen. I came to France at the age of one, I then left when I was 13 1/2 years old to return to my father's home. I therefore spent the first years, the first years of my life in France. My childhood was French.

Yes. I stayed there until I was 26. I learned Romanian. I finished secondary school and my university education. At 24, I became a French teacher in a Bucharest secondary school. I was a teacher for two years. And in 1938, at the age of 26, I came back to Paris. I got a scholarship to do a doctoral thesis at the Sorbonne, a thesis that was neither finished nor started. But I always had a penchant for literature. I always wrote, as they say, poems inspired at the same time by Francis Jammes and Maeterlinck, critical essays, the beginnings of novels and so on and so forth. Other than that, I wrote a play that's called "The Bald Soprano", just to make my friends laugh, and I read it to friends. The friends laughed. So I said to myself that I could perhaps use this play and have it played in part or in its entirety in cabarets to increase my income. But I saw absolutely no importance in my theatrical activities. I dreamt about novels, and essays.

You have become, in some ways, an author of plays, in spite of yourself?

I am a playwright in spite of myself.

And after 10 years, do you think that you do plays that are groundbreaking or that your work, taken as a whole, is more in line with traditional theatre?

In your works, the world is absurd like in Alfred Jary's work, and man is all alone there as in Kafka's work. Is this your philosophy of life?

I don't know. It's very hard to define the word absurd. In my opinion, the world isn't absurd in itself. Everything is logical. For example, they say that the death of Camus was absurd. It wasn't absurd at all. A car lost control, there was a tree, the car crashed itself against the tree. It's quite logical and can be explained. But what seems absurd, is existing, it's existence in itself that seems to me to not be absurd, but incredible, incomprehensible, astounding. Now, of course, there are things that don't come from the core of existence. In this sense, we can say that they're absurd. But in the sense that I say that something is absurd, it means that absurdity doesn't reign. First of all, it doesn't reign inside of myself. What right do I have to say that something is absurd if I didn't have, inside of me, the interior model of that which is not absurd? And in terms of solitude, I think that we are together and alone at the same time. But I think that when we're together, very often, we're alone. And I think that it's deep within my intense solitude that I find others and that there is the possibility for communion. In my fundamental anguish, in my fear of death, in my love, I find death, the fear of death and the ability to love any human from any time period. And, for me, what seems fundamental and extremely important, is to not emphasize the differences but rather what identifies people between each other.

In any case, most of your plays describe a human world that is a world of nightmares. No doubt you're doing this while thinking about a better world? What is the world that you dream about?