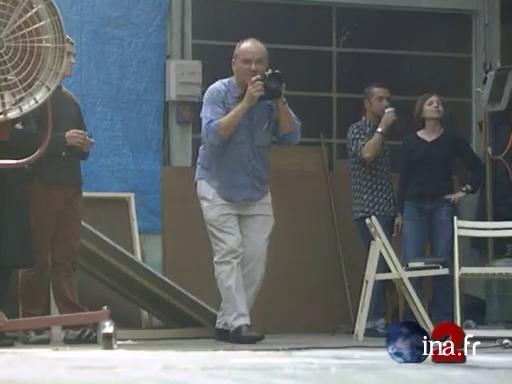 Fashion photography session with Peter Lindbergh in a painter's studio near Bastille and interview with the German photographer regarding his work.

Peter Lindbergh is one of the most sought-after fashion photographers. Born in East Germany in 1944, he only discovered photography at the age of 27 years old. He was trained by photographer Hans Lux before beginning his advertising work.

After the first exhibition of fashion photos in 1978 by the magazine Stern that launched him, he travelled throughout the world and photographed the biggest stars of the moment. Between 1996 and 2002 he was given the job of photographer for the famous Pirelli calendar. He also worked for the big names like Calvin Klein, Giorgio Armani, Prada, Lancôme and Hugo Boss.

After having promoted an image of sensual and classic femininity, he began to underline the never-ending beauty of faces reflecting a profound truth to life. It was looking through this lens that he published a third book Untitled 116 that contained 116 portraits of women from different backgrounds, from fashion to sport to music and cinema, indexed by their first name from A-Z and accompanied by literary texts and famous paintings.

Peter Lindbergh is globally represented by the agency Filomeno.

On the occasion of the recent fashion shows, we've been able to observe, secretly, the work of the photographers, whose job consists of optimising the appearance of the designs presented and the models who wear them. Then, a photo session will take place for the specialised press, like the prestigious Vogue. And it must be known that these photographers are true stars in this domain. This is the case, as you soon shall see, of Peter Lindberg, a German that we are following during a photo session. Report: Sophie Maisel, Pascal Puego.

It's always good to leave them a little bit lost. If we explains ourselves too much. They try to outdo themselves. And we say 2, 3 words, we show a couple pictures, a bit of atmosphere. It's beautiful. And afterwards, they have creative freedom to give something.

It doesn't matter if, on the negative, we don't catch the details. The only goal of this ceremony: for the models to feel invested in the role. Today, they are dancing for Pina Bausch, the German choreographer, or, in any case, that's what they're imagining.
(Music)

Peter Lindberg is currently one of the most sought after photographers. His style: natural light, cinema framing often served by black and white.

In the end, fashion, Peter Lindberg doesn't even worry about it. What interests him: immortalising a certain concept of the woman, breathing an air of mystery.