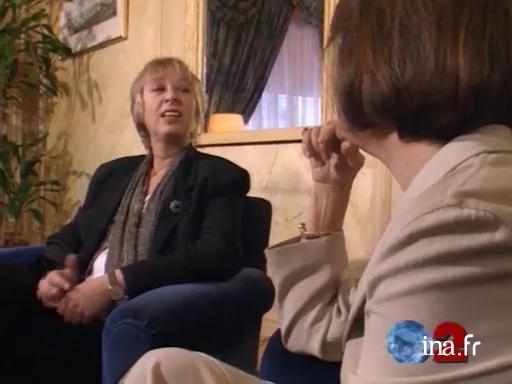 Presentation of the film Antonia's Line, 1996 Oscar winner for Best Foreign Language Film, on the occasion of its release in France. The film's director, Marleen Gorris, is interviewed regarding her intentions, and she meets with Claudia Cardinale who liked and supported the film very much.

The fourth feature film of the Dutch filmmaker Marleen Gorris (born in 1948) joins the resolutely feminist ranks that she bolsters with A Question of Silence (1982). In 1995, she finally gained international recognition with Antonia and her daughters, that won the Oscar for best foreign film.

The intrigue of Antonia and her daughters has no kind of deep theory: Antonia, over 40, comes back to her village after the war with her daughter Danielle. A widowed neighbour asks for her hand in marriage but she refuses, to his great surprise. Danielle, picking up her Fine Arts studies again, wants a child without getting married, she opts for a brief encounter with a stranger. Yet the simplicity and the frankness of the film and its characters generate enthusiasm.

Like the actress Claudia Cardinale - who emphasises the very rare central role of female characters in cinema - other actresses praise Marleen Gorris, like Eileen Atkins and Vanessa Redgrave, who pushed her to adapt Mrs Dalloway by the feminist author Virginia Woolf for the cinema in 1997.

Cinema. Oscar for the best foreign film, in Hollywood, the film "Antonia's Line" is released in theatres. It's a Dutch film which took its director 6 patient years to raise funds for it. This film, well, it's a woman's view of men. Auberi Edler, Hervé Pozzo.

Last year, it was one of the big surprises in Hollywood. Dutch film-maker Marleen Gorris, unknown by audiences, received an Oscar. And it's true that "Antonia's Line" is a little gem. Claudia Cardinale made no mistake and after she discovered the film, she made sure to personally congratulate Marleen Gorris. Brief conversation, in Paris, with two women that are passionate about films. "Antonia's Line" is above all the story of 4 generations of women who, each in their own way, are firmly set on deciding their own fates.

...from Belgium to the north of France.
[Dutch]

Usually, stories talk about a man who has a son who, himself, has an other son etc... But, women are the ones who make children. But nobody talks about that. So, myself, I wanted to take a look at a woman who has a girl, and all of her descendants. In fact, to show that women also have a story.

This fable, filled with charm and humour, puts women in the spotlight and therefore provides actresses (it's rare in film) with dominating roles.

"Antonia's Line" is a superb tribute to tolerance and independence. One of those simple movies that make you appreciate life.