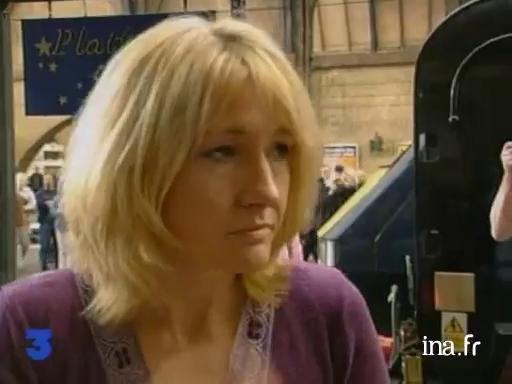 An investigation into the reasons for the massive success of the Harry Potter series: interview with author J.K. Rowling and with the French translator of the apprentice magician's adventures.

In 1998 is the first volume of what was to become a global publishing phenomenon appeared, Harry Potter and the Philosopher's Stone.

Written by a single mother from Edinburgh, J.K. Rowling, the book was refused a nine times by publishers before being released with Bloomsbury. On the advice of the editor Christine baker, Gallimard bought the rights to the series and published the first volume in French in 1998. It was a tidal wave of copies as 2 million were printed in the French translation. Since then, the work distributed in 140 countries is spread over seven volumes, each one recounting a year of studies at Hogwarts, the School of witchcraft and wizardry where the young Harry, 11 years old at the start of the story, uncovers a conspiracy.

Eagerly awaited in bookshops on the day of their release, the Harry Potter series was adapted for the cinema: the two first episodes were adapted by the director Chris Columbus with the young actor Daniel Radcliffe, who grew up over the years like the character. Harry Potter 3 was the work of Alfonso Cuaron, Harry Potter 4, Mike Newell, while five and six have been entrusted to David Yates.

Harry Potter is a genuine publishing phenomenon in the United States and in Britain. This orphan magician is the hero of a literary saga for children. Since his adventures started 5 years ago, young readers have been going crazy over the fourth volume, which has been flying off the shelves since last weekend. Report by Laure-Anne Berrou and Jean-Marc Gardeux.

Pottermania has struck once again. This madness, originating from England, has even driven a few hundred Americans out of their beds last Saturday. For them, there's just one cure: to finally hold the fourth volume of the Harry Potter saga.

They are 8, 9 or 10 years old and devour without blinking the 640 pages of their favourite magician's wild adventures. Harry Potter is a publishing phenomenon. In two days, 3 copies of this format were sold in the United States. Furthermore, the Scholastic publishing house is getting ready to reprint another 3 million. This craze, unknown before 1995, is more and more widespread. She's the one who concocted him in her laboratory of ideas, Joanne Rowling, a single mother who writes in Edimburgh bars when her baby gives her the chance. Discreet, modest, she still doesn't understand the reasons for such a big success. Where do you find your inspiration?

[English] Everywhere, I don't know, it pops into my head all by itself.

How do you feel about this phenomenal success?

I'm surprised and delighted. It's fabulous.

This success doesn't surprise Jean François Ménard at all. He's the first one to own the book in France, and for good reason, he's the one that translates Harry Potter into French.

I think that inside of Harry Potter, there's stuff for children to think about and to feel, meaning that children will find their very own emotions in Harry Potter's characters, which, precisely speaking, is very important to enter this world and to enjoy mingling with those that have become friends.

His job: finding words to describe the little sorcerer's fantastical universe. The names, the objects like the blood lollipop for vampires or the polishing cream for broomsticks.

So that, that's very important since sorcerers' favourite sport is Quidditch, which is played on broomsticks.

Two pinches of translation, a few nights of printing and a zest of magic. At the very latest, Harry Potters potion will be available in France next December.