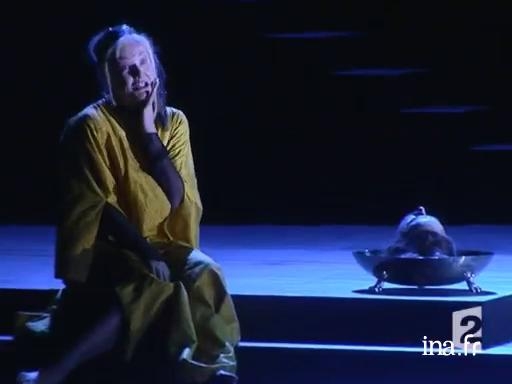 Conversation with Finnish soprano Karita Mattila who sings Richard Strauss's Salomé at the Bastille Opera, and who accomplishes a truly physical and vocal performance in the role of Herodias's daughter.

Born in Finland in 1960, she studied singing in Helsinki, then in London. She started in 1966 in Covent Garden, London, where she sang the roles of soprano and Mozart operas. Then she appeared on the biggest stages of the world with a wide-ranging repertoire (Wagner, Verdi, Tchaikovsky, Strauss then Janacek and Puccini). She also sang Lied. She was directed by the biggest names, Colin Davies, Georg Solti, Claudio Abbado, Zubin Mehta. With her warm and powerful voice, her supreme high notes, her energy, her attention to texts, her capacity to incarnate the characters, Karita Mattila is one of the most noted sopranos of current times, as her many recordings show.

A golden voice, soprano Karita Mattila has dazzled all of the Salomé spectators at the Bastille Opera. Richard Strauss's opera, which received an ovation not for its production nor its stage set but for its majestic interpretation, as this report by Michel Mompontet and Olivier Robert testifies.

For the world's critics, it's unanimous, she's number one, the star. A diva at the summit of lyrical art. This forty-three year old Finn is already being compared with Callas, so that says it all. In the pit, an orchestra imagined by Richard Strauss. Nothing to do with Johann's sugary waltzes. Richard Strauss, on the other hand, is the flamboyant poet of excessiveness.
(Silence)

In 1905, a historic scandal, and the embers of immoral passion that continue to burn.
(Music)

With love, Salomé will kill her lover and will be killed by her own father-in-law. One hour and fifty minutes of opera and an exploit that's as artistic as it is physical. There is singing, of course, but that's not all.
(Silence)

And also dancing, like a young girl. It's a challenge for me, to be a princess, I'm forty-three, but it's so fascinating.
(Music)

The dance of the seven veils and its venerable sensuality. Salomé dances in front of his father-in-law, who desires her, Oscar Wilde on and on. And also Mattila's voice.
(Music)

Salomé will end up crazy and as for Mattila, she will continue to penetrate into singing legend.