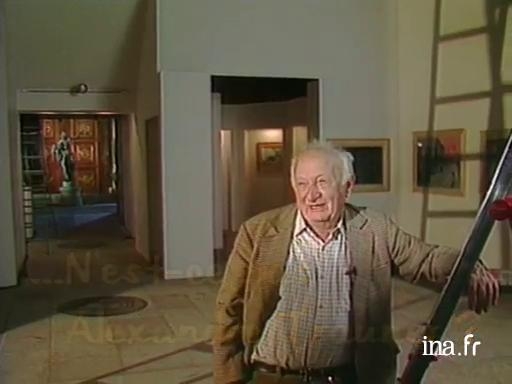 At the end of the 1920s, Alexandre Trauner (1906-1993) left his native Hungary and the anti-semitic persecution of the Horthy regime for France. Ballet decors, wallpaper, photography, fashion, architecture, the future "film designer" gained hands-on experience before becoming chief set designer in 1937.

His friendship with Jacques Prévert, who nicknamed him "Trau", led to his working with "poetic realist" filmmakers, especially with Marcel Carné and Jean Grémillon, whom Prévert wrote for. Trauner was responsible for the sets of Port of Shadows (1938), Hôtel du Nord (id.), Daybreak (1939), The Devil's Envoys (1942), Children of Paradise (1943)...

His talent opened the doors to Hollywood, where he worked until 1974 with the biggest names, Orson Welles, Billy Wilder (he won the Oscar for best art direction for The Apartment), Jules Dassin, Stanley Donen, Howard Hawks and even John Huston. The exhibit "Alexandre Trauner 50 years of cinema", presented for the first time in 1986 at the Beaux-Arts school in Paris, on the occasion of the fiftieth anniversary of the French Cinémathèque, is still in circulation and contains 180 pieces, models, paintings and drawings.

My name is Alexandre Trauner. When I was born, they called me "Sándor" in Hungary because I was born in Hungary. And my age, it's rather... I don't remember anymore. And my profession, it's designing sets.
(Silence)

What are you doing in this Beaux-Arts chapel? I'm doing my exhibit, an exhibit of 50 years of work in cinema.

How many sets, exactly, have you designed for films?

With lots of urban decors?

Yes. I've done Paris quite a bit, and... then we made what are known as peripheral towns, which surround the capital.

Do you feel like a voyeur of the city?

A voyeur? Oh yes, I'm a voyeur. I like being one very much.
(Noises)

This is "Hôtel du Nord". It's a design that I did for the construction that we did in the Billancourt studio. Saint-Martin Canal, that's a bit like a poor man's Venice. You know, there are canals, there are boats and the children really love to play next to them. "Daybreak", the peripheral working class neighbourhood where the unusual aspect, obviously, for me, brought out a great conglomerate, heterogeneous, suicidal sadness. "Les Portes de la Nuit", those were the good days for Carné and Prévert. It was Paris at the beginning of the Liberation, when the family hadn't completely disappeared, when people have to queue for food. It was a transition period and it's an important film. "Port of Shadows", a street in Le Havre, which is obviously covered with fog. It's the Zabel boutique, the paved streets before the war, since Le Havre was destroyed, and now, it's a modern city. It's a street in "Irma la Douce" which is a street in one of the old Halles neighbourhoods. Me, I really liked Baltard, which was magnificent compared to what they replaced it with afterwards. It's not the time period that I miss. What disappoints me, is that they put something there which is pathetic, that is poor.