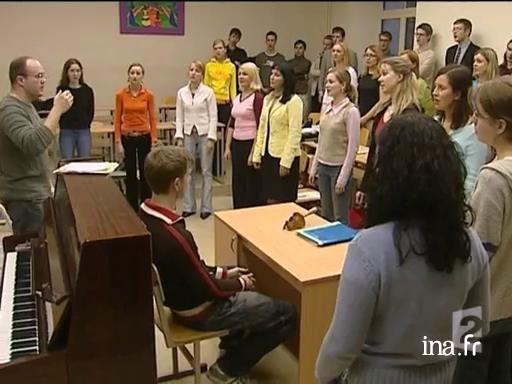 In the Baltic countries, in Latvia, chants were an instrument of defense against Soviet invaders, and they helped save the traditional culture, language and religion. Today, the Latvian Dainas are sung throughout the country.

A true weapon of resistance and identity affirmation, the choral tradition has over time become the main cultural institution of Latvia through which a whole nation honours and perpetuates its national ancestral roots that have been often threatened by the successive invasions (Polish, Swedish and Russian) that this small country has had to endure throughout its eventful history.

By performing "dainas" in choir, these small traditional songs of country origin, extremely simple and formerly sober, mainly deal with life in the fields and the relationship between man and nature. A mix of popular culture, religion and language that Latvians have managed to preserve in the intimacy of families and communities. And when, at the end of the 80s, the population rose up against 50 years of Soviet domination, it was through crowds performing these timeless songs that the movement intensified - the "Singing Revolution", as it was known, suddenly giving a voice to the soul of the people who'd finally been liberated.

Now, it must be said that in certain countries, singing can be a tool of political resistance. It was the case in one of the Baltic countries, Latvia, which was nevertheless under Soviet domination for half a century. The songs of the traditional Latvian repertoire have allowed us to first save the culture, language and religion. Gilles Rabine, Yann Moine.
(Music)

There are a few bad notes, but that's normal. They're not singers by trade, but high civil servants or diplomats. At the end of their workday, they take a singing class. In Latvia, during five decades of Soviet occupation and repression, these popular traditional songs, the daïnas, have allowed them to save their language, culture, religion and identity.

We've always celebrated Christmas, for example, which was usually forbidden in the country, but we always did it because my grandparents are Christian and it's in our family, it's in our tradition.

I wrote a melody over a popular tale that tells the story of an orphan's life. The song is about how much the life of this beautiful young woman with no family is sad and difficult. Laimas looks on, the goddess of happiness, feels pity for her, and decides to change the orphan's life. This is the original theme of the song.
(Music)

And here's its interpretation.
(Music)

For us Latvians, these songs were the only way to save our culture and our identity. It's the soul of my people, whose history and fate were dominated by German, Russian, Swedish and Polish occupations.
(Music)

Fifteen years ago, in Riga, during the struggles for independence, a huge crowd sang this hymn to hope.
(Music)

A song that was forbidden at the time, a challenge to Gorbatchev and to the Soviet empire.
(Music)

So today, history remembers it as the Singing Revolution.