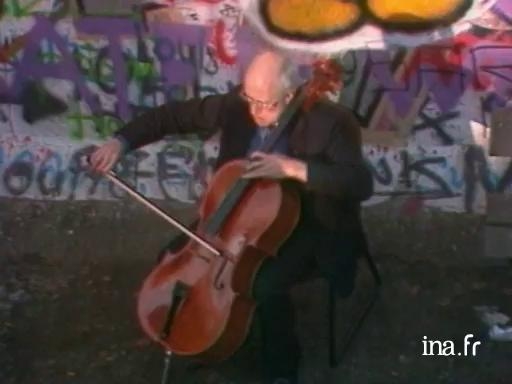 On 9 November 1989, the communist party's political bureau spokesperson made an announcement on East German television: "the borders are open, effective immediately": the Berlin wall's border was open in both directions. Right away, East Berlin's inhabitants came in droves to the checkpoints, especially at the famous Check Point Charlie; the border patrol let them pass through. Joy was erupting.

Mstislav Rostropovitch, the Soviet cello player, set up at the base of the west side of the wall and spontaneously played excerpts from a Bach suite. A dissident forced into political exile in 1974 for having provided shelter to writer Soljenitsyne, and then stripped of his Soviet citizenship, Rostropovitch was probably extremely affected by the significance of the event. Within a few hours, thousands of East Germans rushed to see the "window of capitalism" while Westerners passed to the east side to discover the "land of socialism".

The event was huge; it marked the end of Germany's split, which was in effect since 1945; it also marked the fall, without war, of the communist block, which was forced to open up its borders.

...now, live from the Berlin wall, Philippe Rochot. Philippe, a very simple question to start out, Philippe. Look at these traces here, so it's carved. You'll find several places.

Listen, we're at Checkpoint Charlie. You know, it was the passage point reserved for foreigners. And there, everyone, the East Germans mixed with the Polish people who, usually, crossed the border to go sell their caviar on the black market at Potsdamer Platz. And, here, you see that there's a waiting line that's approximately 300 metres long to pass through. You have to wait an hour and a half. And the same goes for the other side, there is a 300 metre line of East Germans waiting to come spend the weekend on the west side. So what's interesting to note, is that the wall that you see, here, at the bottom, the inscriptions were redone, meaning that 10 November was marked as a truly historic date. And I'm being told that Mr. Rostropovitch, who is right here, in West Berlin, at Checkpoint Charlie, will play, is preparing to play. I don't know if we'll have the time to hear him, Daniel.

Yes, we see him on the screen, in any case, right there.

I still think that it's an extraordinary event, meaning that everyone wants to come celebrate the opening of the wall in his own way.

Well. So we were told, Philippe... Of course, we're going to let Mr. Rostropovitch prepare himself. If we have time to hear him, we'll hear him or we'll play a recording of him at the end of the news. Philippe, this morning, several parts of the wall were opened. I think we're going to see footage on top of what you're going to tell us about these openings. There are at least 9 or 10 spots where they actually (we see it, in the footage) opened the wall with a mechanical shovel.

Yes, the wall was opened with a mechanical shovel, they also dug to put slabs in, to let people pass through. That makes an opening of about 3 metres. And what's extraordinary is, this morning, to find yourself, as we did, between both walls, since, when you think about it, there were two walls that separated Berlin, and in the middle, a No Man's Land, to find yourself, there, in the middle, with this crowd of people passing. And from the helicopter, there really was a very beautiful view since it was this desert, this No Man's Land with this crowd that was crossing and that symbolised, finally, this union between these people from Berlin that never really stopped being able to talk to each other but couldn't all meet each other.

Well. Philippe, we're going to leave you or we're...
(Silence)

(Music) There. This moment that you were successfully able to experience, live in Berlin, thanks to our installations, and that we'll, of course, experience once again in our 8.00 pm news broadcast.