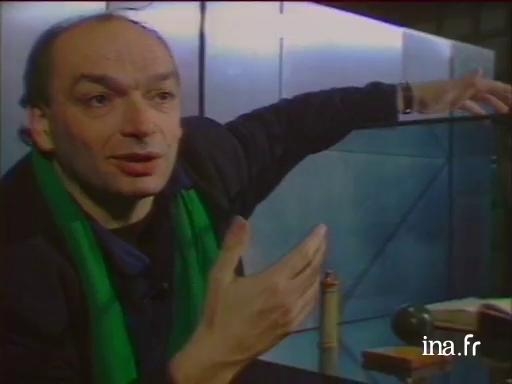 Interview and report on architect Jean Nouvel's creations, whose latest construction was just inaugurated at the Arab World Institute in Paris.

An icon of contemporary French architecture, Jean Nouvel has been often criticised for building more abroad than in France. He became an international star with a Pritzker Prize which completed his long list of rewards: two Equerres d'Argent, the Praemium Imperial, the Médaille de l'Académie d'Architecture to cite just the most prestigious. Assistant to Claude Parent and Paul Virillio, he set up with François Seigneur in 1970. The Jean Nouvel workshops founded in 1994 bring together around a hundred collaborators today.

He fought hard for an architecture revival at the heart of the March 1976 movement and against l'Ordre des Architectes. A social architect, Jean Nouvel offered his inhabitants a vast living area, saving on construction procedures and industrial materials, as Nemausus in Nîmes and the Cité Manifeste de Mulhouse bear witness to. He would be followed down this path by his old associates Ibos and Vitart. To him we owe the Arab World Institute, the Fondation Cartier, the Agbar Tower in Barcelona, the Lucerne cultural centre and recently the controversial Quai Branly museum. Even if each project is unique and rationally adapts itself to its context, he creates a common language of transparency, the search for fluidity, the insertion of vegetation, importance of roofs and the use of black as a primary colour.

A riddle: who are the men whose acts have the most consequences and influence on our daily lives? Politicians, politicians of course, company leaders also, but maybe even more directly the architects who design the environment of our daily lives. One of them, Jean Nouvel, just received in a few days one of the biggest distinctions in his domain. To his credit, the Arab World Institute in Paris, lately, which was just inaugurated, but also social housing projects. A portrait of Jean Peyzieu.

With its glass and aluminum facades, the Arab World Institute establishes the mastery of an architect who until now was only known by specialists. Jean Nouvel and Studio architecture greatly use light and Arab designs that are, in fact apertures controlled by a photo-electric cell. Transparency thanks to the curtain walls over the Parisian landscape, transparent once again for the museum's works, it's Nouvel who conceived the windows there as well.

These buildings which resemble the nearby factories shelter, in fact, 48 social housing units on 1, 2 or 3 levels. The industrial materials, which hide perfect insulation, allow the Nouvel, Soria and Lézènes team to build more cheaply and to offer 50% more space for the same price. The problem is that, even though the square meters are free, tenants are charged for them.

Currently, rent is calculated according to the actual surface. And we're not able to get outside of that, which means that we tend to rent in terms of the surface and the more a flat is "clever", so to speak, if there's a window in the bathroom, if there's a bit of a terrace, the more the rent will be more expensive. So, that's a premium for folly but I'd say that from this point of view, it's important that architects don't stop there. Afterwards, it's up to the politicians, to the administrators to find the formula.

The same metallic construction for these Nîmes social housing projects where Jean Nouvel worked with Jean-Marc Ibos. Here, it's a ship style. We access 114 flats through gangways but also through lifts. As for the pilotis, they reveal a rather fresh parking lot. Here, the flats are 1/3 larger. This triplex is 110m² with an 8-metre ceiling height. It's rented out at 3,200 Francs. Savings are everywhere: bare concrete, boiler room staircase style. Trendy people like this type of flat.

A flat with an unusual design, first of all, and an extra space. The space exists. There's oxygen. We feel like we can breathe. And I think that the flats were, as far as architecture, made in this perspective.

The enthusiasm of the tenants should help Jean Nouvel shake up the social housing standards. In any case, these metal vessels will have made the old social housing cubes of the neighborhood appear outdated.