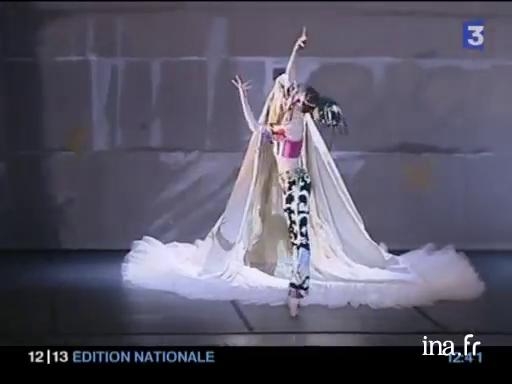 Portrait of Christian Lacroix: a look at his career and a panorama of his numerous creations, from the world of fashion to opera, the interior of TGV trains and the outfits of Air France employees.

A graduate in History of Art, Christian Lacroix was destined to be a museum curator after having passed through the Sorbonne and the Ecole du Louvre. But his passion for suits and important meetings, like that of Jean-Jacques Picart, press-attaché of luxury housing, propelled him in to designer fashion.

He worked for Hermès and Jean Patou, before creating his own company in 1987, at the heart of the LVMH group, Louis Vuitton Moët Hennessy. But in 2005, the Lacroix company was deemed not profitable enough for the world number one of luxury who resold it. The same year, the designer stopped working for the Italian company Pucci, which he had been the artistic director of for three years. Even if they are hard to wear, the Lacroix collections remain spectacular.

Born in 1951 in Trinquetaille, a village near to Arles where Van Gogh painted the bridge, the designer took inspiration from the Camargue, gypsy and Provencal traditions, as well as Madrid, Venice and London of the 17th, 18th and 19th centuries. Luxurious, baroque and shimmering, his creations travel through time and space. They find their natural environment on the stages of the biggest theatres and operas of the world, for which Lacroix ceaselessly created stage costumes.

We're getting to your news, Christian Lacroix. Next autumn and winter's ready-to-wear fashion shows are continuing through tomorrow, in Paris. Your fashion show took place yesterday, at the end of the day, the occasion for us to get to know you better. It must be said that your creativity doesn't stop at the podium. You are being sought for the most diverse things, the most unexpected ones. There is a Lacroix spirit outside of all fashion, a mixed universe. Sabine Gorny, Olivier Palomino.

He's been telling the same story, with passion, for the last 19 years, one of a woman from the South, haughty and proud, in an eternal search of her beautiful Arlesian. Lacroix, he's the one who makes Parisian fashion shine, the one whose every collection provides people with delightful shivers.

It's pure emotion. It's with tears in the eyes. The first... the first pass, tears immediately form in the eyes, it's poetry, it's emotion.

His heart pours out intoeverything that he does and that's what's great. And it's true that we love him.

A Taurus born in Arles, you can't just make that up. In 1987, he made his debut in haute couture through a fortunate opportunity: a business bearing his name financed by Bernard Arnault. Provence, it's flashiness. The entire world is under its spell. The marriage with LVMH lasted 18 years. Too much of an artist, not profitable or commercial enough. Last year, he was fired and his company was purchased by an American group. A new chapter in his life is being written.

We weren't able to transform this business into a profitable venture. I was very patient, I waited almost twenty years to arrive to this conclusion.

I think it's a bit like some marriages based on love: it's better to have a good divorce to start up again with more... to be fresher, newer.

In another life, he would have liked to have been a costumer. Always this nostalgia for the red curtain. He's signed costumes for Bérénice, Phèdre, Così fan tutte.
(Music)

His most beautiful podiums were the Opéra Garnier, the Met in New York, and the Nîmes amphitheatre.

We like Christian Lacroix because he's someone who has remained totally free in his work, and has never been gagged by marketing constraints.

Nevertheless, brands are chasing after him. He reoutfitted the Gaumont film theatres, brought colours to the TGV. He even redesigned the outfits of Air France's personnel.

In planes, people have been talking about it non-stop for the last few months. All of us cannot wait to be able to wear them soon.

And illuminate the dictionary, because between fashion shows and ways of life, there is only one thread. Over time, this passionate and tormented humanist only lacks one thing: a bit of lightheartedness.