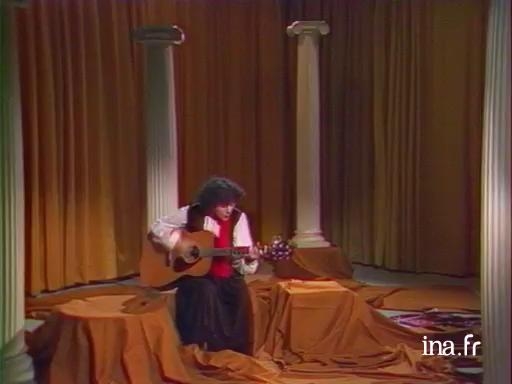 Angélique Ionatos discusses her relationship with her native country - Greece - and sings a song in Greek while playing the guitar.

Born in Athens in 1954, Angélique Ionatos leaves the Greece of the Colonels with her entire family in 1969 to obtain refuge in Belgium and then in France. A guitarist, singer and composer, she recorded a first album with her brother in 1975, Résurrection, which won the Charles Cros Academy's prize.

But it was when she put some great names of Greek poetry to music, such as yesterday's Cavafy or today's Odysseus Elytis, that Angélique Ionatos's solo career truly took off, in 1978, with I Palami Sou. This album, which also won a Charles Cros Academy award, showed audiences her strong affinity for the poetry of her native country, more specifically, that of Elytis (1979 Nobel Prize in Literature), whom she will never cease honouring (O Helios, O Heliatoras in 1983, Le Monogramme in 1988, Parole de Juillet in 1996 - and especially Maria Nefeli (Marie of the fog) in 1984, a vast two voice cantata that marked the end of her solo recitals...). Pursuing her exploration of the Greek soul, Ionatos recorded Sapho de Mytilène in 1992 and then Mia Thalassa in 1994 over music by Mikis Theodorakis.

At the turn of the century Chansons Nomades and D'un Bleu Très Noir opened the singer's world to the multiple cultures of the Mediterranean basin. Her last two albums, Alas pa'volvar (2003) based on Frida Kalho's journal and Eros y Muerte (2007) seem to confirm this stylistic evolution toward a more hybrid and mixed universe.

Angélique Ionatos, winner of the Charles Cros Academy grand prize, author, composer, interpreter, spokeswoman for Greek poets, and, paradoxically, Angélique Ionatos, you are almost unknown in your country. Why?

First of all, it's because I lived... I mean, I started singing abroad because when I left Greece, I was 15 years old, which means that I didn't get the chance, after all... The fact that I lived abroad led to the fact that I never got the chance to sing in Greece.

So when some people talk to you, among other things, about Greece, about the tourist taverns, about the highly exotic bouzoukis, you immediately jump up.

Yes, but without wanting to be labelled an "anti-tourist guide", as some journalists have said... Let's just say that I hate labels but it's true, it's true that Greece remains very unknown, just like all the countries that we think we know a lot about, and it's a tourist county, you can't deny it. But, I think that there's another Greece. This one's a bit less known.

Angélique Ionatos, we get the impression that you feel closer to the Greeks of the Diaspora.

It's obvious since I'm one of them. And when it's far from your native country, let's just say that the way you look at things, with the real distance and the distance in a metaphorical sense, it becomes inevitable... You can't see the Greeks or Greece anymore in the same way as when you lived there. So it's very hard because, at the same time, we idealise it on one hand, and on the other hand, when we go there, we're very disappointed.

During this recital at the "Maison de l'Etranger" which we spoke about earlier on, you said that for you, translating poets is betraying them.

So despite everything, we should still have some reference points regarding the song that you're now going to perform.

Yes. It's about the text of a Greek poet whose name is Anagnostakis, and he happens to talk about words, the fact that there are too few words... all these literature symbols and the fact that we should get back to basics. That's a pretty good summary of it.

So let's listen to this song right away and we'll be right back afterwards to talk about this Greek month at Marseille's "Maison de l'Etranger".
(Music)
(Silence)