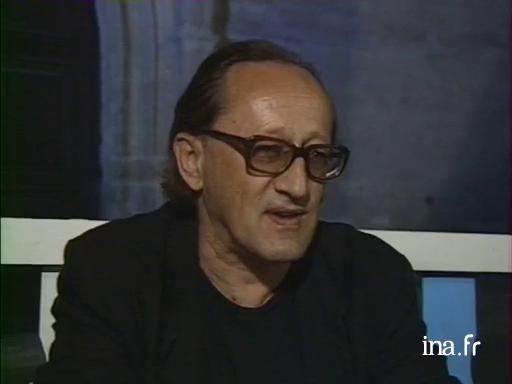 In the context of the Avignon festival, an interview with German theatre playwright Heiner Müller, who explains himself at length on his interpretation of theatre, on writing and on the artist's role.

Heiner Müller was born in Eppendorf in 1929, and died in Berlin in 1995. A playwright, theatre director and poet, he was a symbolic figure of the contemporary theatre scene, establishing his work in the ruins of a Germany beaten during the war.

He spent his childhood in the German Democratic Republic; in 1951, his parents left for West Germany, while he remained in East Germany. He lived in Berlin, worked in journalism, and kept company with writing circles. In 1956, his first play appeared, Le Briseur de Salaires, which was a protest against East Germany's social reality and political system. In 1961, his wife committed suicide; Heiner Müller then turned to the classics - Shakespeare, Homer, Sophocles, Laclos - which he revisited. As a result, he created Sophocles: Oedipus the King (1965-66), Philoctetes (1958-1964), Macbeth (1971), Hamlet-Machine, Quartett.

In his plays, Müller depicted man when faced with old age and death through metaphors borrowed from war, eroticism and sickness. Several of his plays were staged in Paris, by Jean Jourdheuil and Patrice Chéreau. In the 1970s, Heiner Müller was the Berliner Ensemble's artistic consultant, then became president of the Academy of Arts of the GDR, followed by a position of director of the Berliner Ensemble in 1993, replacing Bertolt Brecht.

Is there for Mr. M. Müller a particular importance to write plays in Eastern Germany rather than here? [German]

For the time being, it is much more important to me to write in the GDR.

Because it is a society in crisis.

And is conscious of this crisis.

And there, the theatre has a much more immediate function that here specifically.

And also for a negative reason, which is that there there is no public opinion. There is no press. And that in a certain way, the theatre is a lot more open, and it is a theatre that finds opinion.

Is theatre there an instrument for communicating information?

Information is not a problem, but the information comes from the television.

There can be eight to ten television programs.

Theatre can push away borders, and can cross borders. To do theatre is a sort of border transgression.
(Silence)

If we speak of the society of the east and of the west, is there today, in relation to the things that have been previously said, any hope in the capitalist west, or has there ever been any? Is there another hope of some kind that survives or is reborn in the societies of the east? And is this an object of theatre?

The only hope here, in the western society, is that it remains as it is.

The hope of people who live well.

His personal hope is that things do not remain in our society as they are.

The hopes their society, their hopes are filled with anxieties.

But there is never any hope without danger.

What gives you the strength and the desire to write?

That is a noble question.

Writing is an aspect of his existence. For example. In a primitive way, he cannot sleep without having written.

When he is staging, for example, when staging, sleeping is a problem. Because the things of repetition are not taken to the end, the head continues to work.

And when he writes, when he has written a page, this page is written, it is done. And when he reads it, he immediately falls asleep. It is a medical reality.

You simply sleep better when something is finished, or when one has finished a page.

Which means that it is not only to sleep that he writes?

One can begins for example with the idea that to commit a crime, commit murder, is work. When the murderer has accomplished his task, he can go to sleep.

And in writing plays there is a criminal energy.

And really, when he declared that it was to reduce things to their skeleton, he was thinking of this criminal energy that exists in dramatic writing.

And not in seeking a deadly truth?

He wants to destroy illusions for example, when people start to feel comfortable, he wants them to feel badly.

He starts to feel good when the people stop feeling good.

Is this by pure perversity, or by a complete pessimism concerning universal stupidity?

Neither perverse, nor cynical.

So, he must be very sad at Avignon? Everyone goes to see their own play, and everyone comes out feeling more intelligent.

It is the reality of a festival. It is a bit like vacation. He thinks that if we were in repertory theatre, a theatre that played every night, things would be completely different.