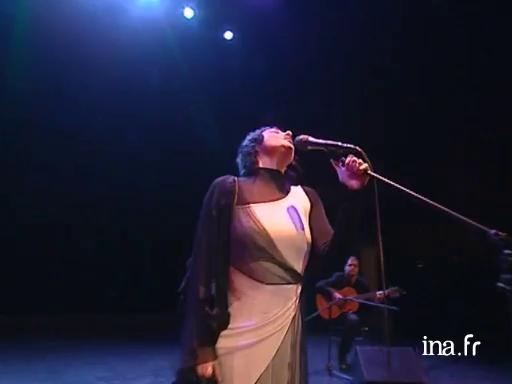 Portrait of Misia, a singer that's enriching the fado, the traditional Portuguese song, with new and personal influences.

Born in Oporto to a Catalan mother and a Portuguese father, Susana Aguiar (known as Misia) started out as an artist (a ballerina mother, a cabaret dancing grandmother) and quite naturally after her tumultuous youth (she took a lead role at the end of the 70s and the famous Barcelona cabaret El Molino) at the beginning of the 90s undertook to deeply reform fado.

The genre had become obsolete, associated in the collective mind with the Salazar regime, but the singer, from her first attempts (Misia appearing in 1991 then Fado in 93), without sacrificing the traditional formal canons, gave it back all its vigour and modernity by putting her strong and sensual voice at the service of the great contemporary Lusitanian writers (Lobo Antunes, Saramago). In 1995 the album Tantos menis, tantos mais pushed her reform further by associating traditional orchestration to unusual instruments like the accordion, the violin or the piano. She recorded two other items in the same spirit (Garras dos Sentidos in 1998, Paixões Diagonais in 99), then in 2001 surprised all with Ritual, a vibrant homage to Amalia Rodrigues, recorded in the traditional orchestral configuration of fado.

In 2003 Misia created her most ambitious record with the guitarist Carlos Paredes, Canto; then in 2005 Drama Box, a real patchwork, singing in Portuguese and Spanish and mixing fados, boleros and tangos.

The songs talks about a love that's destroyed and a heart that's stabbed. The singer becomes a tragic actress. It's fado, and fado is sung that way, with eyes toward the sky.

The fado, I sing it like that, it closes and it makes a bit of effort. Technically - I'm speaking for myself - I think it's very important to find the inside voice with the outside voice. By this I mean the voice of emotions.
(Music)

The tragic actress's name is Misia. She happens to be a colourful woman who comes from Lisbon. If she hunts about at the book store, it's to find the fado of today's texts, because Misia jostles and dusts off the fado. And to find the singer's secrets, you need to look toward the great singers of texts.
(Music)

I've always been very attentive to and attracted by Francophone singing composers, such as Léo Ferré, Barbara, Jacques Brel, and Piaf of course. And I think that it shows in my manner of singing the fado.
(Music)

The comedy of life is told over music by Antonio Paredes. And Misia therefore created her own and unique fado.