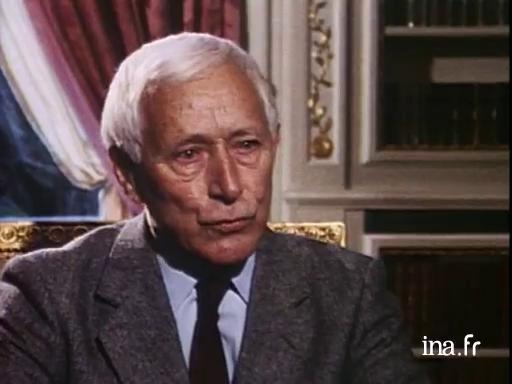 Ernst Jünger, 86 years old, answers Bernard Pivot's questions regarding his Journal Parisien which he ran during the Occupation while working in Paris. Bernard Pivot asks him about being and appearing like an aesthete while wearing a German captain's uniform, when all around him desolation and denouncement reigned.

The political path and the free spirit of Ernst Jünger (1895-1998) have made him one of the most contested, but most admired, German writers of the XXth century. A patriot, he became a volunteer in 1914 and received the "Pour le Mérite" order, the highest German military distinction, at the end of a war whose horrors and fascination he recalled in 1922's Storm of Steel.

Vehemently nationalist, he nevertheless rejected the Nazi party's attempts to reach him, which he denounced in 1939 in On the Marble Cliffs, an allegory on power, culture and barbarianism which earned him an angry response from the Gestapo. Assigned to the Parisian Wehrmacht headquarters, he kept a war diary that detailed his horror of Nazism and his progressive disgust for militarism. However, after the surrender, he refused to participate in the de-Nazification.

Always close to anarchy, he then secluded himself in a village in Souabe, where he continued to reflect upon power, the State, individualism and the dignity of man. A converted Catholic in 1998, the one who wrote that "the loss of self-respect is the beginning of all unhappiness amongst men" died in 1998, at the age of 103.

A success... that you started reading the Bible in September 1941 and you read it from beginning to end, finishing it in May 1944.

Why did you read the Bible in Paris during that time period?

You know, when conditions become even more dangerous, we look for help, and things from politics, even from literature, can't help you as much as reading the Bible or even the Coran, religious things.

So, we notice right away that you're an aesthete. You say that you read a lot. I have an enumeration. You read books by Gide, Anatole France, Giono, Huysmans, Goncourt, Dumas, Montherlant, Léon Bloy, lots of Léon Bloy, in French obviously. You collect autographs, you buy the original editions, you visit the tombs of French writers that are buried in Paris, etc... You are an aesthete. But how can one be an aesthete when one has a uniform on his back, and when all around you there's fear, there's violence, there's denouncement?

The word "aesthete" may not be sufficient enough. In German we say... In Germany, we can say [German word], that means "a poet". So these two things need to be combined.

In your journal, you say the following: "More sacred than a man's life, is his dignity". But during that time period, there was no longer anything sacred, neither life nor dignity. How...

Oh, regarding dignity, you can always try to preserve it. Obviously, this was during the baroque period during the Louis XIV wars, or even before. Things were easier than they are now...

It was a horrifying war.

Yes. When hatred grows so much, but you always have to fight, against this feeling of hatred.

But were you able to fight off this feeling of hatred? And preserve your dignity?

I even think that I succeeded.

Javier Marias on the subject of The Man of Feeling