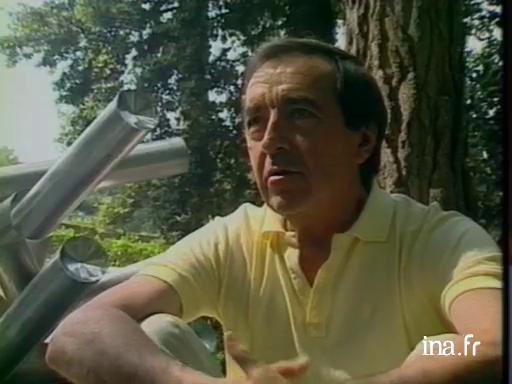 Report on the exhibit of sculptures by Pol Bury, master of kinetics, at the Sapone Gallery in Nice.

Accomplished artist, painter, writer, art critic, editor and director of short films, the Belgian Pol Bury (1922-2005) is particularly celebrated for his sculptures and his contribution to kinetic arts. After having mixed as a painter with Belgian surrealists gathered around Magritte, then the experimental group CoBrA, Bury discovered the works of the American Alexander Calder in 1950.

Seduced by the aesthetics of movement, little by little he abandoned painting to create his first 'Plans Mobiles'. These suspended geometric shapes, abandoned to the open manipulation of the viewer, allowed him to appear in the famous Denise René gallery exposition in 1955, "Movement". Also displaying there was Calder, Duchamp, Jacobsen and Vasarely. Following the Greek Takis' example, he introduced an electric motor to move his works, which he'd not leave to the viewers any more. What Bury was looking for was extreme slowness, imperceptible oscillation. In 1964, Pol Bury represented Belgium at the Venice Biennial.

Following that, the artist distinguished himself by applying kinetics to fountains, which won him several institutional commissions amongst which were creations for the Solomon Guggenheim Museum in New York (1980), the Palais-Royal in Paris (1985) and the Olympic games in Seoul (1988).

And now, an exhibit, which is a real treat for the eyes, as you'll soon find out. It's Pol Bury's works, and it takes place in the Sapone gallery, in Nice. This master sculptor of what we refer to as kinetic, which is based on movement, so to speak, and also on perspective, presents his latest creations, for us to enjoy and for Jean-François Tealdi and Jo Lovett, who can't hide their pleasure.
(Music)

Balls laid out on squares, on cubes or on boards, shapes, triangles, volumes or squares, uneven, somewhat even, on points or on pedestals, that's how Pol Bury appears. It's now been 25 years since he's integrated movement into his sculptures. Like Calder, like Tinguely, like Vasarely or like Duchamp, he's turned the movement into a creed. A movement that is only visible to those who take the time to see it or to contemplate it.
(Music)

The sculptures that are being exhibited in Nice, at Sapone's, benefit from movements that are, shall we say, intimate, and that require contemplation from the spectator, rather than a mere look. So, it's inside of a home that's confronted with something that it has the time to see.
(Music)

Movement is something that we also find in filmmaking, which truly deconstruct images but without actually destroying.

No destroying at all, no. In fact, it would almost be like tickling architecture. What I'm actually interested in is, is that during large-scale or 3-dimensional projects, you can sit down at a table and work with very simple tools that you can carry along with you.

Pol Bury in Nice at the Sapone.