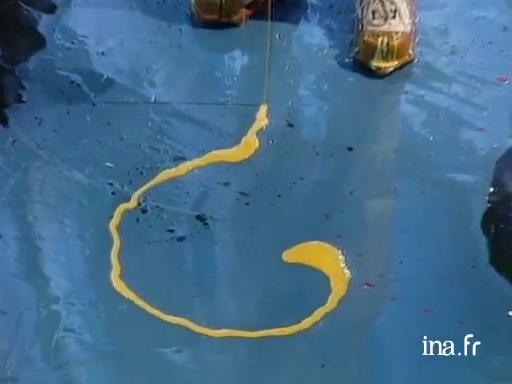 Design exhibit by architect Gaetano Pesce at the Beaubourg Centre in Paris.

Italian architect-designer born in La Spezia in 1939, Gaetano Pesce inspires in his design creations, that are particularly figurative, poetic dimension. After his studies of architecture at the University of Venice, he travelled to show his work (Germany, Belgium, Japan, France...) by participating in projects and creating buildings that would give him great renown from the 70s.

Exhibiting at the international furniture salon in Milan in 1969, Pesce promoted the "Op-Art" movement with the Groupe N: an art that played on visuals more than meaning. His works, often made from his favourite material, resin, played on bright colours and striking shapes. In 1975 the Museum of Decorative Arts in Paris and the Centre of Industrial Creation gave him one of his first retrospective exhibitions in Europe. 20 years later he is once again honoured in the French capital with his exhibition presented at the George Pompidou Centre.

Pesce has lived in New York since 1980. In 2005, the Philadelphia Museum of Art awarded him a prize of excellence for his work.

In Gaetano Pesce's world, it's not enough to be handsome or useful to appear. Each object and every creation by this indescribable designer architect contains a question within itself. And if he's happy to work with resin and polyurethane, wrinkled cloth and papier-mâché, it's because he's been wondering about man and his role in contemporary society for thirty-seven years.

Pesce rarely accepted invitations by manufacturers and, in a certain way, he worked by himself, misusing raw materials, misusing means of production. So to create a world from that, you can call it a very peculiar universe with, of course, useful objects.
(Music)

You could even say that it's a very playful exhibit. All of these very colourful materials, with precisely all of the characters that intervene with these objects, which should be objects without problems, without glitches. So, all of this obviously creates a sort of carnival atmosphere.

In this exhibit full of odours of minestrone distilled by invisible sensors, objects and models have covers that blow up and empty themselves, signing the tasty scenography of this first retrospective in twenty years that is dedicated to him, the architec